Because a combined 15 seasons of Stargate SG-1 and Stargate Atlantis aren’t enough (no, seriously — that’s really not enough for most fans of the series), there’s good news for the future of the franchise! Not only will there be more direct-to-video movies with SG-1 and Atlantis-flavored plotlines, there’s also a brand new series in the works: Stargate Universe. 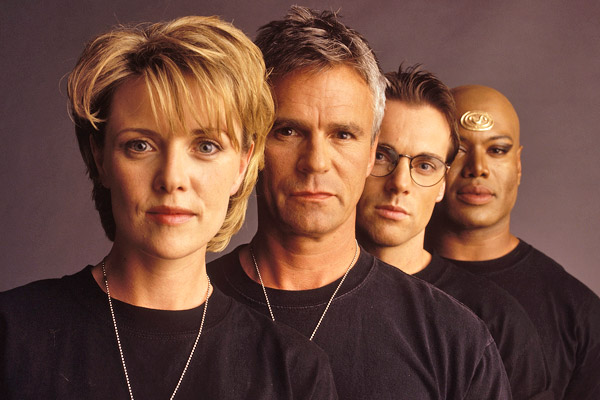 To Atlantis… and beyond

Despite its cancellation of Stargate Atlantis at the end of this season with its 100th episode (to broadcast in January 2009), MGM has given the go-ahead to produce a two-hour movie based on the series.

The extended-play version of the show will reportedly first air on the Sci-Fi channel, and then hit the DVD/download format almost immediately thereafter. This formula has been a great success for the two existing Stargate DTV movies, The Ark of Truth and Continuum. The new movie will be written by Stargate Atlantis‘ executive producers Joseph Mallozzi and Paul Mullie, who currently run the show on a day-to-day basis.

“We’re excited to tell Atlantis stories on a bigger canvas,” Brad Wright and Robert C Cooper, co-creators of both existing Stargate TV series, said in a joint statement. And, they added, “We have plans for both SG-1 and Atlantis to remain vital as we expand the franchise.”

For those new to the adventure — or who only saw the 1994 James Spader/Kurt Russell feature film Stargate (which, compared to the two TV series it spawned, is light on both gadgetry and humor) — Stargate Atlantis follows the present-day adventures of a team of military and civilian explorers who travel to the legendary lost city of Atlantis, which is far, far away in the Pegasus Galaxy.

Our intrepid little team found the island city not by spaceship, but through a Stargate, one of a series of space portals created long ago by a highly-advanced — and long-dead — alien civilization they call The Ancients. In the never-ending quest to seek out other technology and relics left behind by that once dominant race, the Atlantis team finds new allies, new enemies, new worlds — along with a wide array of unusual devices, weapons and other mysterious thingamajigs. (Click here to see when Stargate Atlantis is on in your area.)

And on to a new universe

Stargate Universe is the name of the third and latest Stargate-themed series. Here’s how a recent press release introduced the show:

After unlocking the mystery of the Stargate’s ninth chevron [an element of the gate’s address ‘dialing’ protocol], a team of explorers travels to an unmanned starship called the Destiny, launched by The Ancients at the height of their civilization as a grand experiment set in motion, but never completed.

What starts as a simple reconnaissance turns into a never-ending mission, as the Stargate Universe crew discovers the ship is unable to return to Earth, and they must now fend for themselves aboard the Destiny.

The crew will travel to the far reaches of the universe, connecting with each of the previously-launched Stargates, thus fulfilling the Destiny’s original mission. Challenges will arise though as the ship comes into range of Stargates placed centuries ahead of the Destiny and the crew is unable to control the ship’s navigational schedule. If someone is left behind, there is no way to go back for them, adding to the drama of encountering new races, enemies and adventures.

“In Universe, we plan to keep those elements that have made the franchise a success, such as adventure and humor, while breaking new ground in the relationships between mostly young and desperate explorers, thrust together and far from home,” say Wright and Cooper. “Above all, we believe the Stargate itself remains an enduring icon with infinite potential as a jumping off point for telling stories.”

The new Stargate Universe will debut as a two-hour movie, and then will assume a regular hourly slot at some point to be announced during the Summer of 2009.

More in the world of TV…

This article was originally posted September 1, 2008