Janice Dickinson is reopening her Modeling Agency while America’s Got Talent returns and the Democrats continue their party.

High School Musical: Get in the Picture made me feel very old last night. The kids had to sing theme songs from classic TV shows and one replied, I don’t even know who Mary Tyler Moore is! Yikes! And I got a scare when James was nearly sent to the chorus. He’s my favorite, but he was saved in the end.

The Middleman was a joy, as usual. Ida went evil and Tyler got a cool new job for a guy who you know is going to turn out to be evil. And Fantastic Voyage references! Love that show. 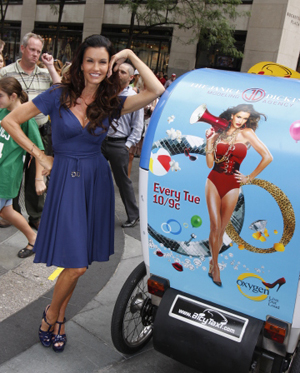 You’ll find plenty of Convention coverage tonight which means this listing will be ‘give or take’ depending on where you live.

NBC’s America’s Got Talent, returns with ten of the top forty acts and then it’s the 2008 Democratic National Convention!

ABC has the usual, Wipeout, Wanna Bet, and then Convention coverage.

CBS has a rerun of NCIS, goes to Big Brother 10, and then convention coverage.

The CW runs an unusual mix of Smallville, and Reaper.

FOX goes with a double dose of House

Janice Dickinson is back and this time she’s moving in with the models. You can watch a marathon of last season’s episodes leading up to the season premiere of The Janice Dickinson Modeling Agency at 10 p.m. on Oxygen.

ABC Family has the season premiere of Greek which is preceded by a new Secret Life of the American Teenager.

HGTV has The Stagers at 9:30 and Lifetime has How to Look Good Naked

Also look for new episodes of Eureka (SCI FI Channel), Making the Band (MTV), and Secret Lives of Women (WE).

Lifetime is working on Mom’s Cooking, a daily daytime show with moms and daughters cooking together.

Ana Lucia (Michelle Rodriguez) will show up in an episode of Lost. Since she’s dead, we assume it’s in a flashback…but you never know.