Four years ago in Athens, Michael Phelps was asked which celebrity he’d most like to meet. His answer came quick: Lindsay Lohan. His reasons were simple, “She’s pretty hot!”

Eight gold medals later and a record-setting, history-shattering run at the Beijing Olympics and Lohan has decided to give Phelps a call. Honestly, it was a text message. A phone call is so ’90s! 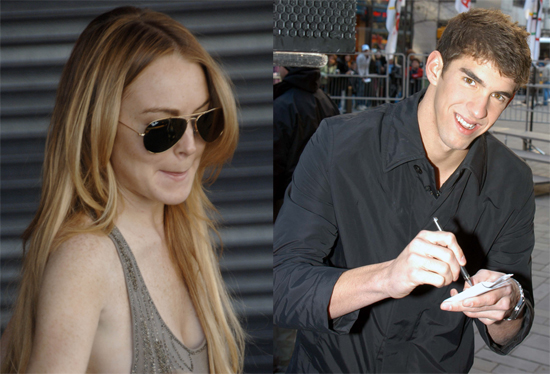 I Know Who Killed Me.

Perhaps Lohan is ready for the rigors of a Phelps-type guy who eats 12,000 calories a day to keep up with his fitness regimen. It would keep her out of the ‘is she too skinny watch club’, and most importantly, she would be sharing her life with someone who keeps the regimen of a champion and all that requires.

When Phelps returns to America for what is sure to be a successful run through the Hollywood talk shows, watch for Lohan and the gold medal winner to be seen at The Ivy or a dozen other Hollywood hot spots in the coming weeks.

If Phelps and Lohan are seen dating in the near future…you heard it at SheKnows!

Gwen Stefani gives birth to baby Zuma
Matt Damon has a baby girl
Christina Applegate is on the road to recovery
Jennifer Aniston confirms: Mayer is her ex