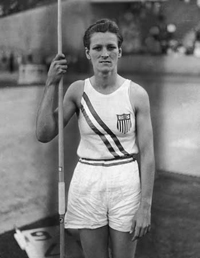 She achieved outstanding success in golf, basketball and track and field. She won two gold medals and one silver medal for track and field in the 1932 Los Angeles Olympics and eventually landed in the Olympic Hall of Fame.

In 1932 alone (at age 21) she played on the Women’s All-America collegiate basketball team and won eight track and field events at that year’s Olympics.

The first Ethiopian woman to win an Olympic medal, Derartu Tulu won gold in the 10,000 meters in 1992 by more than five seconds and again in 2000.

Born in a country where it was even harder for women to achieve sports success, Tulu went to Barcelona in 1992 and came away with a gold medal. Not only the first female medal winner for the African nation, she won the gold as the best. 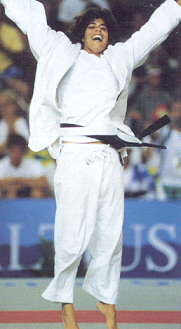 Arad became the first Israeli to win an Olympic medal, putting the sport of judo on the map in her country when she finished second in Barcelona, dedicating her victory to the victims of the 1972 Munich Massacre.

Where just 50 years prior, the country did not exist and its citizens were homeless across the globe, to witness Arad holding a silver medal not only stroked Israeli pride, but Jewish pride internationally. 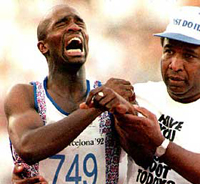 Britain’s Derek Redmond was expected to compete for a medal in the track and field 400-meter race in Barcelona, but pulled a hamstring soon after the start and fell to the ground.

In one of the more iconic images in Olympic history, Redmond’s father ran to the track, helped up his son and they finished the race together.

With Redmond wincing in pain and crying, the power of the Olympic spirit has rarely been repeated with such passion. The crowd gave him a standing ovation.

Up next… Currently there is an Olympic inspirational story that won’t see the inside of a Beijing stadium. But this man’s story exemplifies the spirit we at SheKnows have tributed along with Five to Watch in Beijing.