Songs usually age well. A few do not. These are the Top 10 Irrelevant Song Lyrics starring the one and only Beatles. 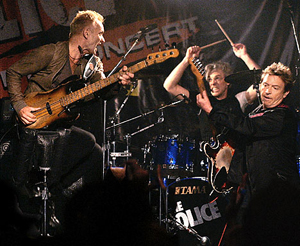 10. Roxanne by The Police

A red light, seriously, Sting! Have you heard of a little invention called the internet?Not to mention the fact that, ironically, Police and time have managed to clear Britain and America’s streets of brothels and street walkers.

For Roxanne to turn on a red light would be no big deal in 2008. People have blue lights, red lights, green lights adorning their homes all the time. Doesn’t mean their engaged in illegal
activity!

“Roxanne” may be one of the greatest songs in rock history, but its relevance has faded.

The Beach Boys may have owned one, but if there are any still on the road, pleas let us know.

Especially with fuel prices breaking records every day, the idea of a gas guzzler cruising the streets is such an image of a long gone era. A effective little ditty in terms of pop music
credibility, “Little Deuce Coupe” still lies in the bin of music discards because the Beach Boys’ lyrics have no relevance to today’s listeners.

8. 57 Channels and Nothing On by Bruce Springsteen

In 2008, to count channels would be futile. Depending on your level of television dedication, you could have as many channels on your television as are stations in the world.

Try finding nothing on then! Honestly, bet there would still be times where there was “Nothing On.”

Sorry Bruce, you’re not The Boss on this one.