Seven couples, 14 routines, and that was all only one night! 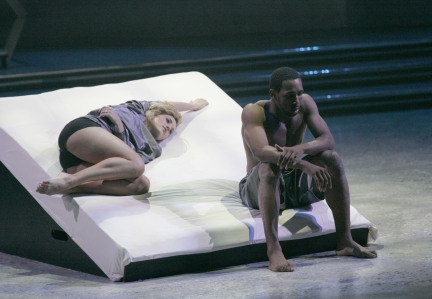 What a busy night it
was on “So You Think You Can Dance!” This week, each couple had to perform two routines and that made for a jam-packed night.

Sadly, not all of the dancers made the grade. Let’s have a look.

Comfort Fedoke and Thayne Jasperson were paired up for the first time as they both lost their partners to last week’s elimination. In general, its a better match-up than either of
them had before and that’s a plus. On the downside, they’re still not even close to the top contenders. Their first routine was a Broadway number to “Cool” from “West Side Story.” Great
choreography, but they just didn’t bring it. It should have been hard hitting but it was weak.

Next, the duo took on an unusual smooth waltz and that was really lovely. Though I have to keep wondering about who is dressing Thayne, I often find his wardrobe too fussy and
distracting. Comfort, on the other hand, never looked lovelier.

Courtney Galiano and Gev Manoukian are plugging along but I’m not seeing anything special here. Their Hip Hop routine was more bouncy than ghetto and Courtney took
the spotlight when it should have been Gev. They also closed the night with a Broadway routine to “New York, New York” from “On the Town” and I was not impressed. This time, however, I don’t think
the fault was with the dancers so much as with the choreographer. The routine was nothing but the two of them running all over the stage acting awestruck. Boring.

Chelsie Hightower and Mark Kanemura are my fence sitting couple. Sometimes I really like them and other times it’s just not quite there. They began with a
flirty jazz routine that had its moments and then it was a Foxtrot to a very odd song, Paul Anka doing Bon Jovi’s “It’s My Life.” Frankly, I found the song so distracting, I couldn’t pay attention
to the dance.

Jessica King and Will Wingfield started a shirtless trend tonight with Will’s shirt acting as a prop for an emotional Lyrical Jazz number. He makes such
fabulous shapes with his body and for a change, she was right up there with him. Before that they took on a Jive that just didn’t have the snap it should have. Still, they’re one of the couples to
beat.

Kourtni Lind and Matt Dorame should be headed to the bottom of the leader board tonight thanks to so-so performances in both the Mambo and the Hip Hop. There’s
simply nothing special here, they don’t light up the stage and that’s what’s going to get them gone.

Kherington Payne and Twitch Boss on the other hand, always light up the stage. Take their Paso Doble. Normally, I hate this dance but there was a nice twist with
dueling matadors and Kherington really stepped it up a notch. The facial expressions on both of them really sold the dance. But they brought down the house with their Contemporary routine by Mia
Michaels. An inclined bed was set center stage and we watched Twitch as he dealt with the loss of his (literal) dream girl. There were rose petals and leaps of joy and so much sadness, what a
dance! The best of the night.

Katee Shean and Joshua Allen are always fun to watch as well but I think they slipped a little this week. Their Contemporary routine had plenty of heart and emotion and tricks.
Their West Coast Swing, however, failed to please. The number was choreographed by Benji Schwimmer with the aid of little sis, Lacey, but it had a strange rhythm to it. I was looking forward to
this one but it left me perplexed in the end.

So that’s it for this week. Bottom three?  I’m thinking Kourtni and Matt, Comfort and Thayne and Gev and
Courtney with Kourtni and Matt both going home. Tune in tonight at 9:00 on FOX for the next elimination on “So You Think You Can Dance.”