Being Naomi Campbell can be difficult. Today in a British court she pleaded guilty to charges stemming from her most recent raucous at a London airport. 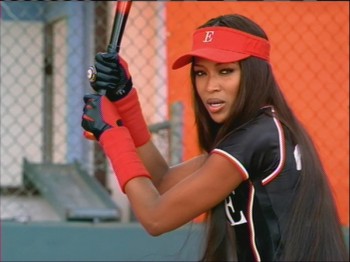 Although Campbell failed to use her arsenal of cell phones, the supermodel did manage to ruffle more than a few feathers of security officers responding to a disturbance complaint at London’s new Heathrow airport terminal.

The case of ‘air rage,’ as the British press is calling it, was over before it truly began. Apparently, Naomi wanted this latest anger flare-up to be dealt with quickly. Officially, she copped to hitting two cops while throwing a tantrum on a British Airways plane awaiting to take off to Los Angeles.

If you recall, it was during the opening of the new wing of Heathrow, Terminal 5, and Campbell was not the only passenger upset with the service. While in the First Class seating area, Campbell was addressed by the plane’s Captain about a piece of luggage that did not fit. Enraged, she called for help and insisted on being placed on another flight. The disagreement escalated as soon as Heathrow officers arrived on the plane. Campbell was handcuffed and removed.

Now, Campbell awaits her sentencing where she is facing possible jail time and serious fines. In this post 9/11 world, one does not joke around with violence and airport security, Naomi!

Editor’s note: The sentencing portion of her trial has completed and Naomi Campbell has been given 200 hours of community service.

Recent celebrities in a furor