Cocktails with Justin Timberlake. Say it out loud and it is hard to believe. 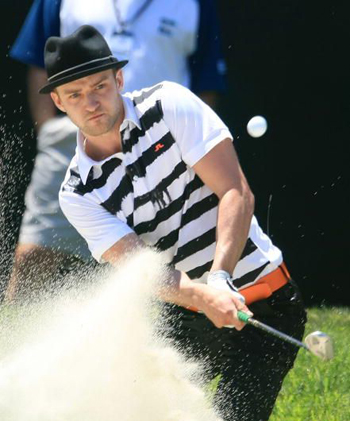 If I didn’t have allergies, I don’t think I would have been invited to hang out with Justin Timberlake. This is the U.S. Open, and there I was on the golf course — and in his suite.

That’s right. Because pollen makes me weak, the kid who brought “SexyBack” and I shared a beer and a Claritin.

A US Open highlight

His room at the Torrey Pines Inn overlooked the eighteenth hole (where drama would unfold at the last possible moment for Tiger Woods — to clinch a Monday U.S. Open playoff that would lead to his victory). It was filled with family members, bodyguards, a few celebrities… and me.

The reason for sitting in Timberlake’s suite was not to get a scoop for a magazine or newspaper — or even SheKnows. The cutie hosted me in his room because all the rumors are true: Justin Timberlake is a nice guy.

That’s right. Timberlake is a nice kid. There is his listening to his mom, Lynn Harliss, even when she’s making him blow his nose at the U.S. Open.

“Justin, honey, you come here and take these tissues,” Harliss said. Her southern accent in front of a room full of people is comforting. “I swear you’re gonna wipe that nose off your face if you don’t.”

How cute is that?

Watching the young mega-star interact with the over 20 guests at the U.S. Open was simply witnessing a charming, bright and respectful young man. No chairs were thrown and no starlets were accosted. Just some good friends, a few PG-rated jokes and a lot of golf talk. Heading to this U.S. Open at Torrey Pines, I could call myself a Justin Timberlake fan. Now, I feel like I am his number one fan.

A few days before Tiger Woods teed off at the U.S. Open and began another historic drive towards a U.S. Open Championship, the Torrey Pines course was populated with celebrities and one extraordinary everyman for the Golf Digest U.S. Open Challenge.

Woods had said a year prior that there was no way that an amateur with a ten handicap, could break a score of 100 on a course designed specifically for the U.S. Open. Omaha Nebraska’s John Atkinson, who won a Golf Digest essay contest and has inoperable lung cancer, sat in a foursome that included “Today Show” host Matt Lauer, Dallas Cowboys quarterback (and Jessica Simpson squeeze) Tony Romo — and our favorite, Justin Timberlake. 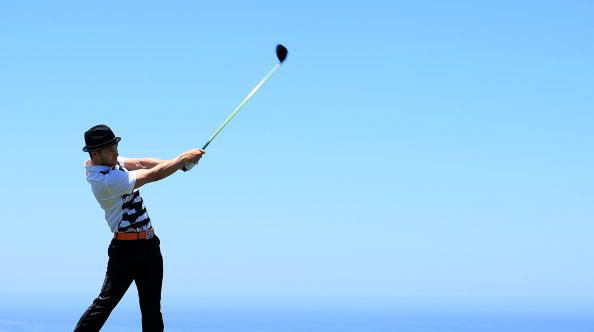 What does any woman faced with that invitation do first? I bought a new outfit.

Arriving at the course with almost 200 journalists from across the globe, eyes immediately turn to JT.

Hacking away at the ball dressed in a black and orange golf shirt a jaunty trilby hat and black tuxedo pants held up with an orange belt, there he was merely feet away, Justin Timberlake.

Could you imagine Tiger dressed in that outfit? But Justin was, well, he was adorable.

Over the years, interviews have ranged from the coolest of cool, Bono and George Clooney, naming two who were personally intimidating. Justin was beyond approachable. In fact, after Timberlake hit his first shot, he dashed off to the men’s room and informed the gallery, “I knew I forgot something.”

After Atkinson hit his first shot, Justin high-fived the Omaha medical salesman as if they were old friends. They kind of were since Justin called the cancer patient a few days earlier to play nine-holes, just like a good friend without the camera glare behind them.

My allergy kin, the biggest pop star in the world

While achieving a ‘Tiger Woods doesn’t know what he’s talking about’ run on one of the world’s toughest golf courses (he scored a 98), Timberlake’s eyes mirrored mine, possessing the tell-tale signs of a fellow allergy sufferer, red, red and more red.

Justin, you’re not alone! The sniffing on the South course was loud enough to drown out the singing of the birds.

Enter this down to-earth woman applauding Justin Timberlake and his every shot. It was none other than his mom, Lynn Harliss. Mama Timberlake could not have been friendlier. Bonding over talk of sons, trading stories like two moms on the playground, this was different. The two of us were on the bluffs of Torrey Pines, and her son is Britney Spears’ ex-boyfriend. It was kind of surreal to be honest. 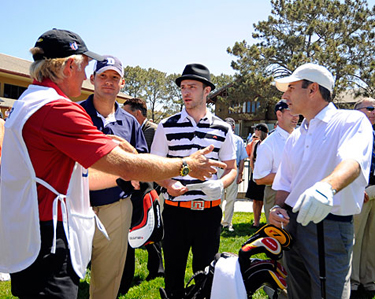 By the thirteenth hole, Justin was suffering so badly that I leaned over to Lynne and kiddingly asked if he needed an allergy pill.

“If you have one, I’ll be your new best friend,” she said in earnest.

By the eighteenth hole, site of unforeseen golf drama days later, this journalist’s own allergies kicked into high gear. I needed to file my story. Timberlake shot a 98, Romo, sans Jessica Simpson, shot an unbelievable 84, Lauer nailed Tiger’s 100 figure and the Omaha resident scored, 114, quite respectable.

“Ya’ll should come tomorrow to the room for a little party,” Lynn Harliss said handing over her card. “Justin wants to talk to you about John Atkinson.”

There I was in Justin Timberlake’s hotel room, but I felt I had stayed long enough.

“Hey, are you the one writing about John Atkinson?” Timberlake said in his drawl as he softly touched my arm. “I want to talk about how inspirational he is. Hey, you want a beer?”

And so, for the next hour we spoke about John Atkinson and Justin’s love for golf, his mom, my kids and Torrey Pines while sipping a beer.

Neither of us sneezed.