The Jonas Brothers rocketed out of New Jersey when they made an enormous splash with their debut effort, “It’s About Time.” 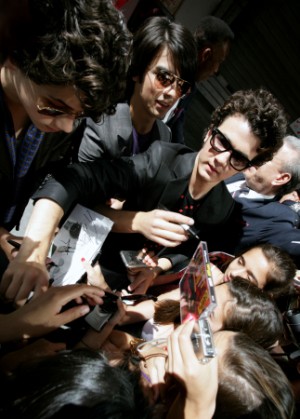 With Ear Candy hits “S.O.S.” and “Year 3000,” the three brothers, Kevin, Nick and Joseph Jonas caught the eye and ear of a certain Hannah Montana. Before they knew it they were opening up for Miley Cyrus on her phenomenally successful world tour. Nick was even Cyrus’ boyfriend for period.

As soon as Cyrus’ audience grabbed a hold of the brothers Jonas, everything went from chaotically exciting to off-the-charts international sensations.

With their new album not due until August, the boys are generating some serious heat, long before any tracks even hit the singles-driven radio charts or a title has been released.

For a moment, Kevin, 20, Joseph, 18, and Nick, 15, stepped out of the storm of swelling popularity to discuss the finer points of music superstardom with SheKnows.

SheKnows:You guys were obviously all drawn to music, how did it work out that the three of you picked up instruments that worked for you guys to even become a band in the first place?

Kevin:It was definitely something where we grew into what we love. I started messing around with instruments when I was younger, drums, bass, everything. But I found when I picked up the guitar it really connected and I really felt at home there. Nick started to play piano and guitar and drums, because he’s super talented on all of them, the same thing with Joseph.

SheKnows:Coming from New Jersey and being the shadow of New York City, what was it like during that very first trip to New York for the family where the visit was for you to be on TRL?

Kevin:It was an amazing. It really was. We had so much fun even just going up there to TRL. We were going to Times Square to be on TRL. (They all laugh)

Joseph:We have great fans who vote for us, so we’ll probably be back.

SheKnows:I would think MTV might make room for you guys. Did it strike you at the time about the artists that have walked through that studio?

Nick:Oh yeah, definitely. We’ve seen the TRL birthday where the 18-wheelers unload in the middle of Times Square and a million people come out. That first visit to TRL was definitely a moment in our lives.

Their Father’s Day present is success

SheKnows:The thing that struck me the most about your music is the harmony. Part of that could be that you all come from the same place, but even so, priceless harmony is a rare find. Is that something that occurred to you guys right away that you sang well together?

Kevin: We grew up in church choirs and things like that. We had to learn specific harmonies. My dad is a harmonic expert. We grew up with my dad teaching us how to sing. It is amazing thing. We have him on the road with us and he helps us out. He’s there at rehearsals listening. He makes sure it’s happening. 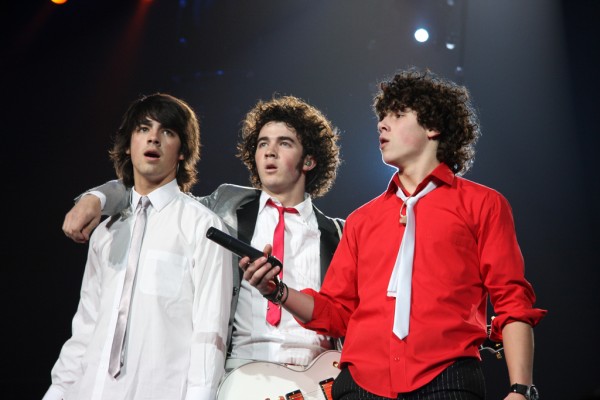 SheKnows:That leads me to my next question, is again, how rare it is that siblings would grow up and be so talented as you guys are together, were your parents musicians?

Joseph:Our parents are very musical, especially our dad. He’s an amazing musician. Our mom has amazing vocals. We always grew up around music and around music people.

SheKnows:Nick, you all seem so grounded, even with the swirl that has got to be your lives, is it your parents to credit for that as well?

Nick:We have such a strong family core. It helps to have people that are musically refined as well. 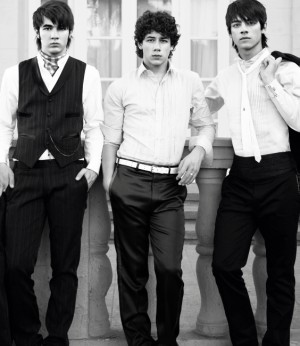 SheKnows:Individually, you each bring something different to your sound. You each like different genres of music. What did each of you listen to growing up that fueled this very unique blend that seems to be a little bit of everything?

Kevin:My first tape I ever bought, it was a tape, which is funny, was MXPX record. Punk rock band, I loved rock n’ roll music, we all do. Then, I started playing acoustic a lot more. Then I got to like John Meyer. It was an evolution of what I loved and learned to love over time. It’s just good music. My dad was always playing The Beatles and Al Green for us, Earth, Wind and Fire, everything.

SheKnows:It’s kind of hard not to appreciate everything with those guys as your models.

SheKnows: As a fan of iTunes, what was it first like when you opened up that iTunes store, and you were number one?

Joseph:It was crazy. We were watching it every day cheering it up. ‘Come on, one more!’ (laughs) It was amazing. The artists around us at the time are some of the biggest out there.

SheKnows:Is it me, or does it seem that the brother bands of the past didn’t get along, Oasis, Black Crowes, so you guys are the exception. Was that again, a credit to your parents teaching you respect? I mean, you’re in a tour bus all day, nerves will be frayed.

Kevin: We have an amazing family base. We rarely ever fight. We’ve learned how to deal with being together so much. Everything we do is together. (laughs)

Nick: We’ve become a really solid, tight band. We have learned how to play well together.