What’s better than covering the red, check that, orange carpet for an evening? Truly supporting its endeavors. Every year the Step Up Women’s Network, a national non-profit membership organization dedicated to strengthening community resources for women and girls, holds a star-studded Inspiration Awards fundraising event celebrating the year’s most inspirational women.

Stepping up for women

This year’s special event with main sponsors of Crystal Light was a real treat. For starters it was held at the IAC Building, an architectural Mecca by Frank Gehry. This is contemporary cool.

We caught up with the incredibly grounded JoJo prior to her special performance during the evening’s festivities. Don’t let her seventeen years fool you, this singing prowess is wise beyond her years.

SheKnows: What does it mean to you to step up?

JoJo:It means to be an empowered young women and to empower other young women. As females they should uplift each other and support each other, make smart decisions together and have an open dialogue instead of being catty towards each other.

SheKnows: Who inspired you to step up?

JoJo:My mom is an incredible woman and she empowers me every day.

SheKnows: What projects are you currently working on?

JoJo:I’m currently working on my new album called ‘All I Want is Everything.’ There will be a single out in August and I’m about halfway through the recording process so the album should be out by the end of this year and if not, then early next year.

SheKnows: What can we expect, is it the same JoJo we know and love or is it different?

JoJo:I would say it’s quite different. As young as I still am I’m not thirteen. I feel like I’m turning into a young woman and I’ve experienced a lot in the past four years. I’m writing pretty much everything on this album, co-writing, producing, being completely centered in the creative process. I wouldn’t have it any other way so I’m putting my experiences and my thoughts on paper and I’m able to do something that I think my fans will love.

SheKnows: Do you have any more acting roles coming up?

JoJo:I have a lifetime movie coming out in the fall, actually. It’s called “True Confessions of a Hollywood Starlet.” It was a lot of fun to do and we did it in Canada but my huge exciting thing is this new record that’s coming out. 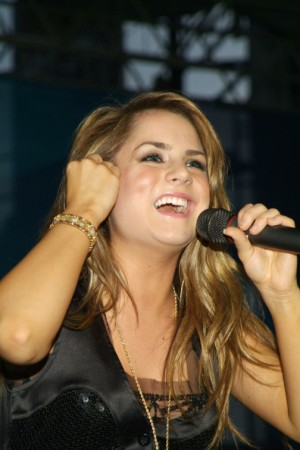 SheKnows: You seem so grounded. Who or what do you attribute this to?

JoJo:Boston, Massachusetts. I really do. I still live there. It’s been the best thing for me, living there. My aunt and uncle are a street away and I walk to their house. I drive myself everywhere. I go to the grocery store and I do completely normal things.

SheKnows: Do you have any fun summer vacations coming up?

JoJo:I’m going to Atlanta, LA and Miami, all great locations. I have family in Atlanta so it’s all about the way you look at it. I have fun when I work.

SheKnows: What’s one thing your fans would be surprised to know about you?

JoJo:Oh my goodness, Yes! I wanted to go to the premiere so bad. I can’t wait to see it, I was a big fan, even though I’m young. You know, it’s scandalous, it’s wonderful, the fashion’s great.

SheKnows: Which character are you most similar to?

SheKnows: Who are you wearing?

JoJo:I don’t know but I like it and the shoes I know are Guiseppe. I didn’t know my toes would be showing and I have green on but that’s ok.

JoJo: Thank you, thank you.

SheKnows interviews One Republic
Jay Nash is a singer you ‘Need’
Check out Jessica Simpson’s new single
And, while you’re at it…The Pussycat Dolls latest single “When I Grow Up”