Sitting in the Gibson Amphitheatre waiting for the gold carpet to begin, there emerged the sound of angels from inside the theater. Peeking in… it was Coldplay!

One of our favorite bands, Coldplay is in the throws of their long overdue resurgence to the music world. After their last release “X&Y” in 2005, this is their first foray back into a world they truly dominate. To hear them in person performing their new single for the first time live on stage in a theater such as Universal Studios’ Gibson, was chill-inducing.

You can imagine the pure bliss of such a fan, recovering from smoke overflow from the next door Universal Studios fire, to hear the ‘you couldn’t forget it if you tried’ passionate, string-heavy opening moments of “Viva la Vida.”

Then, there was Chris Martin’s voice, unmistakable. It was a moment to treasure and one never to forget. “I used to rule the world…” 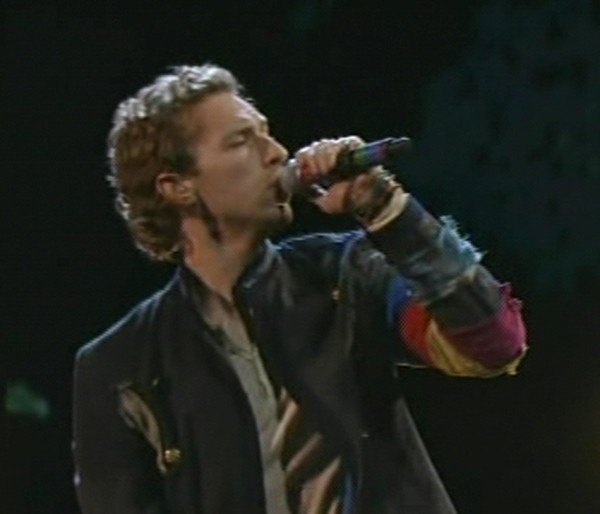 Hearing them was all that was needed. Energized and reborn, this reporter headed out on the gold carpet ready to interview Hollywood’s best and brightest. (Yes, you too, Paris!)

Seeing Coldplay walk two feet from me in person would come within the hour. The band, led by Chris Martin and accompanied by a deafening roar of screams from the stands, dashed down the gold carpet before running inside and performing their awe-inspiring first single live. That was about as close to a Beatles-esque screaming fan moment as I can imagine.

There is no way this band has not got U2 in its sights, ready to wear the crown as the kings of rock. Did you see that performance? Incredible!