“Two and a Half Men” star Charlie Sheen married real estate agent Brooke Mueller in an intimate ceremony in Beverly Hills, according to a rep for the couple.

The wedding on the night of Friday May 30, 2008, was attended by close family, including Charlie’s father, West Wing star Martin Sheen, and brother, Emilio Estevez. His daughters by actress Denise Richards were flower girls.Charlie popped the question last July on a Costa Rica beach, after the couple had been together for a little over a year. This is Charlie’s third marriage and Brooke’s first.Charlie’s ex-wife Denise Richards, with whom a stormy relationship still makes great gossip fodder, relayed a backhanded compliment to the couple via Us Weekly. “I honestly think they’re a match made in heaven,” she said. Richards is on record calling both Charlie and Brooke liars for various incidents, including one surrounding an email in which they claim Denise asked for a sperm donation from her ex-husband in order to have another baby. (Read Denise’s rather descriptive reply to that one here.)Here’s a pic of the happy couple one day into their union — at the Chrysalis Butterfly Ball, a charity fundraiser — on May 31. 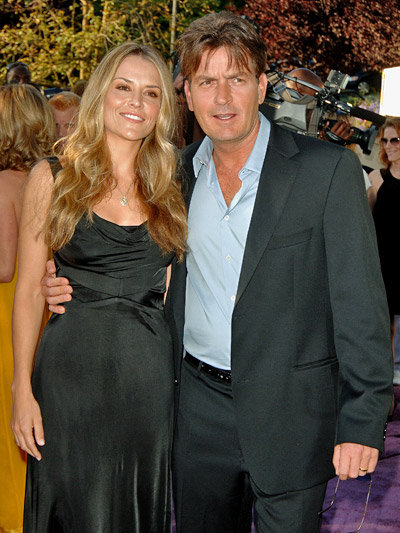