Their distinct characters with larger than life personalities shine on screen. That’s right, Miranda Hobbes, the cynical career-minded attorney; Charlotte York, the Pollyanna optimist; and Samantha Jones, the vixen — sat down to talk with SheKnows prior to the release of “Sex and the City: The Movie.”

Fans everywhere seem to relate to the seemingly realistic characters on a deeper level. Are you a Carrie or a combination of a few of them? Maybe you are a Charlotte — perhaps with a dash of Samantha? (PS: You can take a quiz to find out.) 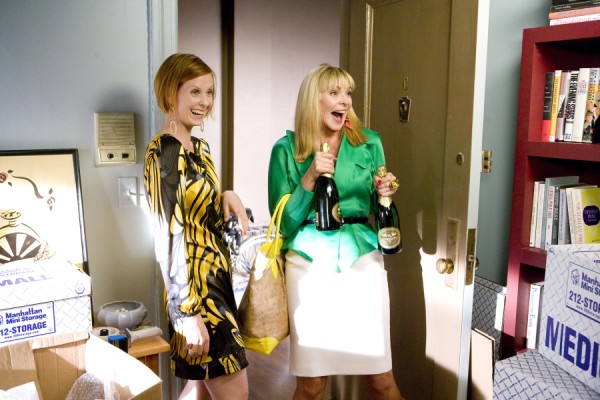 Cynthia Nixon who plays Miranda explains, “You can just look at them as yourself and you can say, ‘Oh, I’m that one or I’m that one or I’m half this one or last Tuesday I was that one.’ But I think they are really classy…and you can also think of them as like Carrie is the whole self and the others are like the brain and the heart and the libido. I mean there are a lot of ways to think about them.”

“I think that those four characters together make up one complete woman, the different sides to a woman whether it’s the sexuality or the contemplation or the fear or the aggression. I mean, together this is a whole woman, and I think that’s why everybody can relate.”

What character are you?

She continues, “I get asked a lot, ‘Well, which character are you really like in real life?’ Well, I’m like all of the characters. I’ve been in periods of my life, I’ve wanted the white picket fence, I wanted to be married and have a husband. I’ve also been really pissed off at how things didn’t work out exactly how I wanted and I’ve also had very contemplative times and also very sexual times, too. (laughs) I think that’s the brilliance of what Michael continues to write. He knows these characters so well. He knows the actresses that he’s writing for.”
As to whether or not they’re similar to their SATC personas in “real life”? Kristin Davis (as Charlotte) admits there are aspects that are close. “I’m hopeful, certainly, but maybe not quite as hopeful as she is. I’m a loyal friend definitely…I’ve been a dog-lover for a long, long time….when Charlotte got her dog it seemed an organic thing that came from me. You often see women who carry their dog like a baby. Remember when I used carry her over my shoulder? That was on purpose.”

In fact, Samantha continues the trend of owning a dog since she gets a pooch in the film. Kim Cattrall exclaims, “Right on cue – one take wonder, that girl! Three months to prepare for those close-ups, and her close-ups were always before mine.” (chuckles)

Reflections on the show

Considering the show ended four years ago, just as viewers have evolved during that time-span so have the larger than life characters. Nixon explains, “I feel like it started as a story about four single women, now we are not four single women anymore. A lot of us are married. And it stopped being about being single. It started being about these four women and the choices they make and what paths they choose to take.”

In fact, it seems like shooting felt a lot like creating a mini-movie, says Davis. “It wasn’t like a regular show where you shoot one episode at a time and you had to think about that story. There were long stories and we were often shooting simultaneously. You didn’t think ‘this episode’ versus ‘that episode.’ It was one overall thing,” she says. “Michael (Patrick King) would come to us before the season and say, ‘This is the big picture,’ and he did that before the movie. This is the big picture — and these are the beads.”

Multi-tasking was certainly a virtue, as Cattrall adds, “it took us seven days to do one show. We shot two shows at the same time, and invariably there would be a couple scenes that had to be missed because we were getting onto the next schedule. So at one time, we had these T-shirts made that said, “6 Units” and we had 6 units of 6 different shows shooting at the same time. We would always do this sound when we’d see the sun come up, which is (imitates rooster crowing). (laughter) We didn’t see a lot of our real families. We saw a lot of our ‘Sex and the City’ family.”