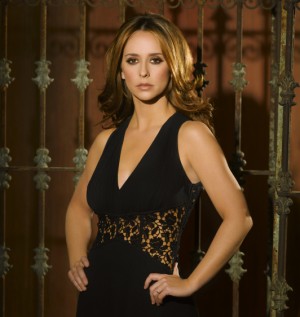 It’s a big night of season (and maybe one series’) finales on CBS. It all begins at 8:00 with the third season final of “Ghost Whisperer” starring Jennifer Love Hewitt. In “Pater Familias,” Melinda discovers the truth about her family’s past through a series of bodily possessions.

Think you’ve got what it takes to be a “Ghost Whisperer?” Take the quiz and see which character from the series you’d be as you take a walking tour of Grandview.

At 9:00 it’s the first season finale, and possible last episode ever of “Moonlight.” In “Sonata,”  Mick and Beth face the ultimate consequence of a relationship between mortal and immortal when a vampire kills a human in the heat of passion. But when the murder investigation threatens to expose vampire identities, Mick and Josef take action.

Will this be the last of Mick and Beth? The series was not renewed by CBS but word is that SCI FI Channel might be interested in picking up the show. Time will tell.

Finally, at 10:00, it’s the explosive fourth season finale of Numb3rs. In “When Worlds Collide,” Don and Charlie find themselves in conflict over their differing beliefs as they investigate a case involving national security. Meanwhile, Megan faces a crisis of conscience and leaves the team.

It’s brother against brother, so you know it’s going to be an angst-filled ride.