Celebrate 100 Episodes with “Dancing with the Stars” and the music of the Rock n’ Roll Hall of Fame is on tonight’s “American Idol.” 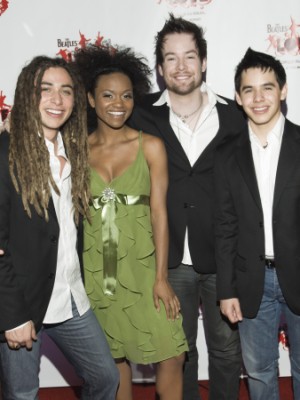 Put on your party dress and dancing shoes, tonight “Dancing with the Stars” celebrates its 100th episode and it’s going to be quite a blast. Thirty returning celebrities return, witness dances by some of the hottest couples of the past and a count down of the Top 10 Best Dances from the history of the series.

Tune in at 9:00. Before that, ABC has “According to Jim,” and following Jimmy is “Women’s Murder Club.”

NBC has “Most Outrageous Moments,” a Molly Shannon tribute on “Saturday Night Live” and a new “Law & Order: SVU.”

Fox has a couple of shows you might like, a movie-themed “American Idol” and “Hell’s Kitchen,” where Gordon gets mad. Surprised? I didn’t think so…

And don’t forget The CW goes with “Beauty and the Geek” and “Reaper.”

“Workout” is new on Bravo at 10:00, two teams battle for a spot in the final in BBC America’s “Last Restaurant Standing,” and VH1 has the “40 Hottest Hotties of the 90s.”

— The CW is going with shows for the adults instead of the kids in their new daytime block. “Judge Jeanine Pirro,” will lead off followed by “The Wayans Bros.” and “The Jamie Foxx Show.”

— Former VH1 reality show contestants will gather together for a second time in the new series “I Love Money.” Yeah, I think we got that.

— Nick at Nite is moving toward more family programming and away from the sitcoms with new reality series such as “Family’s Got GUTS” and a competition series for families and their pets.

— Family Guy’s Seth McFarlane made a deal with Fox that is reported to make him the highest paid TV writer / producer in the biz.