The rubble from the explosion that is the Miley Cyrus Vanity Fair photo controversy is still falling to earth. 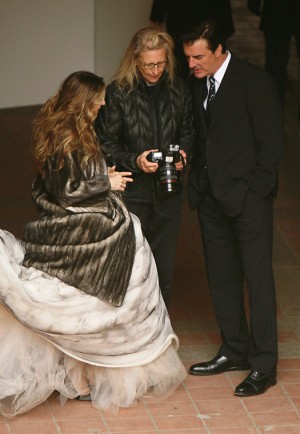 The Disney Channel superstar began her day on a movie set by hearing of a statement Disney corporation released about the entire incident.

“Unfortunately, as the article suggests, a situation was created to deliberately manipulate a 15-year-old in order to sell magazines,” Disney spokeswoman Patti McTeague said yesterday.

Miley Cyrus, besides her previous statement, has not added any comments to this firestorm.

Meanwhile, Vanity Fair and Leibovitz released a statement through their spokeswoman,” Miley’s parents and/or minders were on the set all day,” Beth Kseniak said of the photo shoot. “Since the photo was taken digitally, they saw it on the shoot and everyone thought it was a beautiful and natural portrait of Miley.”

Leibovitz was hard at work at her next Vanity Fair cover already. Shooting “Sex and the City” stars Sarah Jessica Parker and Chris Noth for the upcoming movie that is set to rule the summer box office.

Cyrus and Disney have both leveled heavy accusations on the famed photographer. The idea of manipulating a 15-year-old girl into topless photos holding nothing but a sheet is not something the public is taking lightly. News crews have been following the normally reclusive photographer at the center of this whirlwind that has made the evening news and become a sensation.

The teen sensation is currently in Nashville filming the “Hannah Montana” movie and this scandal will hardly stop the train that is the Cyrus machine from achieving a billion dollars in earnings by the time she turns twenty.

Later in the day, photographer extraordinaire Leibovitz refused to comment on the reaction from the Cyrus family, the public or Disney. It seems the powerful ears on that mouse have shaded any comment from the celebrity photographer if she ever wants Disney work again. Between all their properties including ABC, Leibovitz can not take any chances of further angering the entertainment giant.