The stars were out in force for the premiere of War, Inc. Wednesday starring Hillary Duff and John Cusack. Excitement from the film arises from many aspects, but the rumors are true: Hilary dances with a scorpion. We have the scene below. 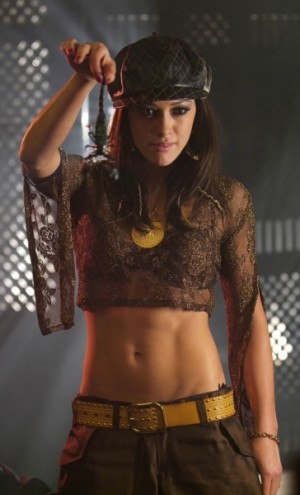 A timely film, War, Inc. is seeking to break the curse of the box office that seems to prevent audiences from showing up for war-related films.

“War, Inc.” opened at the Tribeca Film Festival and brought out all the stars including the festival’s host, Robert DeNiro. The festival, that began as a little New York niche festival has grown to include Hollywood heavyweight movies, such as “War, Inc.”

Madonna and Mariah Carey have even debuted films at this year’s fest.

John Cusack stars in this picture that also features his sister, Joan, and showcases a suggestive dance by Hilary Duff that has the internet buzzing.

The clip has been provided for SheKnows by the producers of “War, Inc.” below and it makes us at SheKnows wonder how many takes it took for Duff to get the scorpion down her pants to see the scene we have here?

The film arrives nation-wide May 2 with co-stars Marissa Tomei and Sir Ben Kingsley in supporting roles.

A political satire of the deepest kind, “War, Inc.” may be just the film audiences need to both laugh and wince at the world surrounding us today.

When Dan Aykroyd is playing a former Vice President who is ruling a Middle East country though his position as head of a corporation, the connections certainly run quite close to reality.

The question remains if audiences are ready to laugh at war while the nightly news shows its reality.