Cynthia Nixon survived an award-winning television show — a rare career in Hollywood as a woman past the age of thirty — and breast cancer.

Related story Ginger Zee on IG Live With Sam Heughan is Every Mom Mid-Pandemic (Minus Sam, That Is) 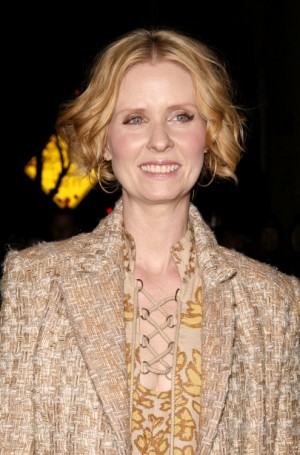 Cynthia Nixon,
the 42-year-old “Sex and the City” star, revealed on “Good Morning America” that she was diagnosed with
breast cancer two years ago. Nixon has been named the official 2008 spokeswoman for the Susan
G. Komen for the Cure Foundation.

The disease runs in Cynthia’s family, having struck bother mother and grandmother.

“I always sort of thought, ‘I’m probably going to get breast cancer. There’s a really good chance,'” she said. “I go for my completely routine mammogram and then I get a call from my gynecologist.
And she says, ‘Well, I have some — it’s not such great news, but here it is, but it’s very small and we’re just going to get in there and take it right out, right away, and then you’ll probably
have radiation.”

She broke the news to her children gently and with optimism. “I talked to them together and, basically, I told them, ‘You know, they found some breast cancer in my right breast. It’s very small.
It’s very early. I’m going to have an operation. They’re going to take it out, and then we’re going to have six-and-a-half weeks of radiation every weekday, and this is like what Grandma went
through and I’m going to be fine.”

The reason she kept her disease quiet? She didn’t want paparazzi at the hospital when she was going through treatment. But all’s well that ends well.

“As the daughter of a breast cancer survivor,” knowing my personal risk made me more aware and more empowered when I faced my own diagnosis,” she said.