The Rock n’ Roll Hall of Fame made its way into the â€˜80s last night by inducting two of that decades’ musical stalwarts. 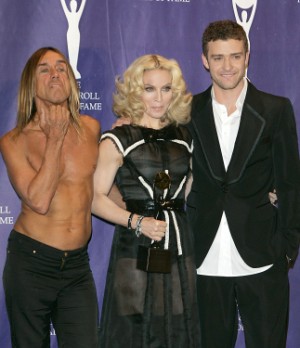 Madonna and John Mellencamp led the 2008 class at an induction ceremony held Monday night at the Waldorf Astoria Hotel in New York. Madonna in many ways led the inductees and what will prove interesting is how the exhibit captures the artist who pop culture could never put a finger on and define. Joining Mellencamp and Madonna was Philadelphia soul pioneers Kenny Gamble and Leon Huff, responsible for many of the O’Jays hits including “Love Train.” Joining that duo was songwriter Leonard Cohen, British invasion rockers the Dave Clark Five and the surf rock Gods, the Ventures (“Wipeout”). Heartland rocker Mellencamp was introduced by Billy Joel and after Mellencamp performed his classic “Authority Song,” he told the crowd that the disdain the song emits against “The Man” he still possesses after all these years. “I wrote this song, and I still feel the same way today as I did when I wrote it 25 years ago,” Mellencamp told the crowd. Madonna was introduced by Justin Timberlake and her band of choice to perform her music was Iggy Pop and the Stooges. That punk band made their way through a scorching set of “Burning Up” and “Ray of Light.” Timberlake’s speech was filled with double entendres, reflecting the millions Madonna has created through her music and image. “The world is full of Madonna wannabes. I might have even dated a couple,” Timberlake said to a full house of laughter. “But there is truly only one Madonna.” He went on to describe his experience working with the legend on her latest album which drops next month. Timberlake apparently was not feeling so hot when he first met Madonna and the icon asked him to drop his pants for a B-12 shot she administered herself. “That’s one of the greatest days of my life,” Timberlake said. Although Madonna corrected his recollection of the B-12 incident, “Everything he said is basically true. But I didn’t say â€˜drop â€˜em, I said pull your pants down.”