Upon hearing the news that TVT, his former record label (and the first such company to completely piss the man off) fired half their staff and filed for bankruptcy in February 2008, Nine Inch Nails’ Trent Reznor took a break from “doing secret things” in Los Angeles to fart in their general direction.

On Monday, February 18, the minimalist nin.com main page contained a single post, entitled “you’re gonna get yours.” One snarky little sentence followed: “Not ALL news about the music industry is bad these days” — linked to a story about TVT’s doom. 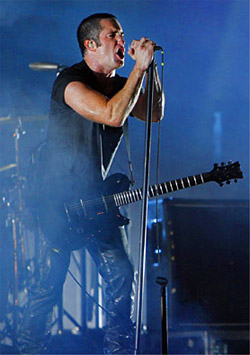 Why was Reznor so cheery? Put simply: History.TVT Records, NIN’s first label, was considered for many years to be one of the top independent imprints. The music that launched the company, however, was not indie fare — rather “Television’s Greatest Hits,” an album made up entirely of TV theme songs. Once TVT was flush with cash from fans of “Leave It To Beaver” and “Love Boat” theme tunes, the company decided to branch out into industrial and rock music. (The business actually still carries the name “TeeVee Toons, Inc.,” but the owners wisely use an abbreviation for their non-schlock releases.) In 1989, along came Nine Inch Nails and the “Pretty Hate Machine” album — a breakout hit for both Reznor and the label. But just a year later, the seedy-motel-with-vibrating-bed-style honeymoon was over when (amid other problems) release and royalty issues for the “Head Like A Hole” EP made the song of the same name as prophetic as it was popular. Because much of the turmoil stemmed from the doings of company president Steve Gottlieb, there was no easy fix. NIN and TVT eventually parted, though Reznor was left with lingering financial ties to the company — essentially the cost of his freedom. (The bitterness was slow to fade, as evident on Nine Inch Nails’ second album, “Broken,” which carried the usual liner notes followed by a barb: “no thanks: you know who you fucking are.”)Trent Reznor was hardly the label’s only malcontent. Pitbull, one of the artists currently on TVTs roster, also points the finger of blame at Gottlieb. “A label’s there to further and promote your career, but it feels like they just keep holding me back,” the rapper said earlier this month. Then, after hearing of the company’s bankruptcy filing, he told AllHipHop.com, “Of course the situation is very unfortunate for the people who lost their jobs, and it’s unfortunate that it came to this… but it’s a very fortunate situation for the artists. That puts us one step closer to freedom.”As Reznor notes, now it’s payback time… and karma can be a beautiful thing. (In this case, it means figuring out how to deal with well over $10 million of debt.)Still, not everyone is cheering. The staff at Matador Records — another indie label with similar bootstrappin’ roots — had a very different take on the news. “The end of TVT Records — easily the most visionary independent imprint since the heyday of Enigma — should send a chill down the spine of every man, woman and child.”Yeah, whatever, guys. See how you feel about them after being bitch-slapped by the legal system just to get back what should have always been yours.