It’s true: Despite her Academy Award for Woody Allen’s Bullets Over Broadway, Jennifer Tilly’s No.1 movie in terms of fan response is the 1998 horror flick, Bride of Chucky. So naturally, she was willing to do a sequel — in The Seed of Chucky Jennifer plays herself and a homicidal dolly named Tiffany. “Yeah, it’s a very silly script,” she concedes with her trademark infectious laugh. “I play the doll, the little killer doll, and then I also play myself, Jennifer Tilly international star of film and B-actress.” 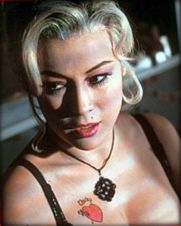 In the movie, Jennifer as herself is a stereotypical insecure actress always on the hunt for the next Big Role and on a perpetual diet. “I say derogatory things about myself. There’s actually a scene where I’m on the phone, where Jennifer’s on the phone and Tiffany’s on the phone pretending to be me and Tiffany keeps piping in and saying things. And I think that my assistant is making fun of me, so I say, ‘Stop it’ and she says, ‘Stop what?’ and I say, ‘Stop imitating me. I don’t sound like that’ and then Tiffany says, ‘Yes, you do.’ So it’s really funny.”

One of Jennifer’s major focuses on preparation was to work on her figure. “I’m really lazy,” she confesses. “Most of the times when I get a part, I play character parts so I go ‘Well, this character has a sedentary lifestyle. She’s a little bit over the hill, her better days are behind. I always do things like that.’ But when you’re playing yourself, you can’t say ‘Hey, there’s Jennifer Tilly, she’s fat!’ All of a sudden I’m craving fattening food. I was recording the Tiffany doll and doing the voice work first, so just in case I didn’t lose any weight, I put in some references to that. So Don [Mancini, the director] took one look at me and he started putting in jokes about how I’m trying to diet and I won’t let my assistant eat because I have no will power.”

I told Jennifer I’d love a “voodoo diet” in reference to the “voodoo pregnancy” she goes through in Seed of Chucky. You see, the story basically follows the ending events of Bride of Chucky, as the murderous duo of Tiffany and Chucky (voiced by Brad Douriff) are now faced with the challenge of raising their gender-confused child (voiced by Billy Boyd) and becoming a real family unit. Their diabolical plan involves becoming flesh and blood and they’ve got their sights set on Tilly and rap star Redman — the two will quickly make and have a child thanks to a voodoo ritual — and baby makes three human bodies to embody.

Jennifer is not a mother, but she said that if she were ever to have a baby, she’d love a 24-hour pregnancy because, “I’ve heard being pregnant is a living hell!” (Hm, could that word have come from her sister, Meg, who has three children?)

As for doing yet another Chucky movie, Jennifer says, “Actually the end of this one, I’m still Jennifer Tilly, am still alive in some form.”

Whatever happens, with or without Tiffany, Jennifer will always be a living doll.