Nicole Kidman is finally revealing what caused the demise of her marriage to Tom Cruise. 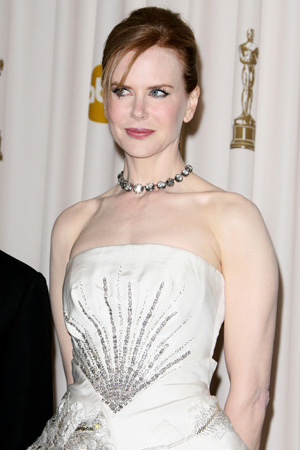 A normally reticent Nicole Kidman has spilled the beans to Vanity Fair about details of her former marriage to Tom Cruise, including two sad tales of miscarriage.

Nicole says that she got pregnant quickly after marrying Cruise, at the age of 23, but lost the baby soon after. “From the minute Tom and I were married, I wanted to have babies,” she said. “And we lost a baby early on, so that was really very traumatic. And that’s when it came that we would adopt Bella.” Nicole and Tom went on to adopt another child, their son Connor.

But that wasn’t the only tragic loss the star suffered. In March 2001 she suffered another miscarriage, a month after she filed for divorce from Cruise. Weird. You know she got pregnant with a real baby instead of a robo Scientology baby and Cruise got mad and left her, then the stress caused her to miscarry. Murderous Tom Cruise. Run, Katie!

Nicole then goes on to say that she desperately wants a biological baby with new hubby Keith Urban, and that he’s slowly coming around. “I’m yearning to have one. I think I would be very sad if I wasn’t able to have a baby. Keith knows I want one, and he has been getting there slowly.” Well tick-tock, Urban. That chicken ain’t gettin’ any younger. Botox can freeze her face but it can’t freeze her biological clock.

Nicole Kidman: Why I decided to have my baby via surrogate

Why Nicole Kidman kept her baby a secret