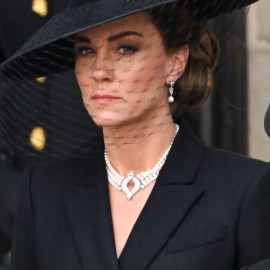 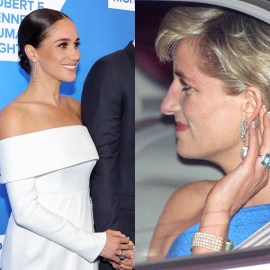 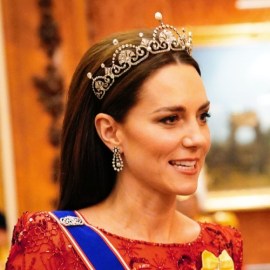 Kim Kardashian is known to be an avid jewelry collector and her latest find has ties to the royal family. The SKIMS founder now owns a bit of palace history after reportedly buying the Attalah Cross, once worn by Princess Diana, at a Sotheby’s auction.

Kim bought it for $197,453 at their Royal & Noble sale in London on Jan. 18, according to TMZ. The sizable amethyst and diamond pendant harkens back to 1920, and comes from the collection of the late Naim Attallah, CBE. Sotheby’s described it on their website as a “Fleurée cross set with square-cut amethyst and accented by circular-cut diamonds” — those diamonds range from “4.25 – 5.25 carats.”

The Princess of Wales wore the dramatic statement piece during a time when she began “to take autonomy in her life” and make “bolder fashion choices.” She borrowed the piece for a charity event on Oct. 27, 1987, where she wore a black-and-purple Elizabethan-style gown designed by Catherine Walker & Co. Given the meaning behind Diana’s choice of jewelry, it’s only fitting that Kim scoop up the coveted necklace at time when she’s discovering her own personal freedom after her divorce from Kanye West.

Princess Diana’s piece isn’t the only celebrity jewelry item Kim has in her collection. She also owns items once worn by Jacqueline Kennedy Onassis and Elizabeth Taylor. You might say that the reality star is going through a pop-culture icon phase — Liz, Diana, Jackie — and of course, we can’t forget that Marilyn Monroe dress for the Met Gala. She’s a contemporary icon honoring legends of the past.

Before you go, click here to see all of our favorite photos of Princess Diana.