Last night’s Critics Choice Awards featured some of the biggest stars in Hollywood hitting yet another red carpet for this awards season. So far, we’ve been treated to some wonderful red carpet moments, but there are a few behind-the-scenes snapshots we’ve been fawning over too. Last night, Christina Applegate brought her daughter as her plus-one to the Critics Choice Awards, and we loved seeing this mother-daughter duo celebrate the evening together.

In the backstage photo, the Dead to Me star and her daughter Sadie Grace LeNoble struck a pose for the camera. The mother-daughter pair nearly matched in their monochrome looks, and we got just a glimpse of Applegate’s 11-year-old while she sported a black mask and hat. Applegate, who was nominated for Best Actress in a Comedy Series for her role as Jen in the Netflix dark comedy, even took to Twitter to commemorate the occasion.

“Critics choice awards nails. It says Jen and Judy,” the caption to Applegate’s tweet read, featuring two photos, including one of the actress showing off her fabulous manicure. “And the other pic is of the best date ever…my rad daughter.” These two were pretty much the raddest duo at the CCAs.

Applegate has been very forthcoming about how her life has changed following her 2021 multiple sclerosis diagnosis. This is actually one of the first major events fans have seen the actress attend in recent memory since she publicly disclosed her diagnosis. We loved that, on her special night, Applegate was joined by one of her biggest supporters.

Before you go, click here to see every adorable photo of kids at the Golden Globes over the years below: 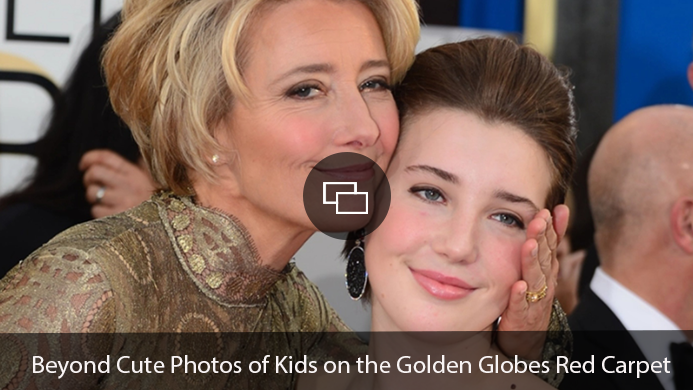