There was a lot of noise surrounding the news that Denise Richards joined OnlyFans in solidarity with her 18-year-old daughter Sami Sheen. Dad Charlie Sheen wasn’t very supportive, so the former Real Housewives of Beverly Hills star decided to help ease the “backlash” her oldest child endured.

Richards told SheKnows at The Hollywood Reporter‘s Women in Entertainment Gala on Wednesday that she understood where her daughter was coming from. “Being a woman in this business, who has also done sexy roles, I thought, ‘I am going to do it too. I don’t care,'” she explains. “I think it’s important as a woman to do what we want to do and not make decisions on being judged on what other people may think or say.”

As a mom of three to Sami, Lola Sheen, 17, and Eloise Richards, 11, she wants her kids to thrive, but it can be hard with two parents in the entertainment industry. “It’s very difficult when you are children of parents who are in the public eye for the kids to find their identity,” Richards shares. “I didn’t grow up that way and our girls are growing up very differently as a lot of parents here [at today’s event] who have kids.” It’s why the 51-year-old actress stays far away from Sami’s OnlyFans page, she wants her daughter to have her own voice outside of mom and dad’s fame.

“I don’t go on my daughter’s page,” she adds, “From what I’ve been told, she keeps it very tasteful.” Ah, Richards is getting a full report from someone who is keeping a watchful eye — it takes a village!

What Richards does do is offer all of her children helpful advice when it comes to dealing with the spotlight. “Whether it is OnlyFans or any social media, I encourage my daughters to block out the noise and to not read a lot of stuff,” she says. “It’s hard for me as a grown woman, who’s been in this industry for as many years as I have, to block out negativity. At their age, it’s very hard.”

Before you go, click here to see the steamiest OnlyFans accounts from your favorite A-listers: 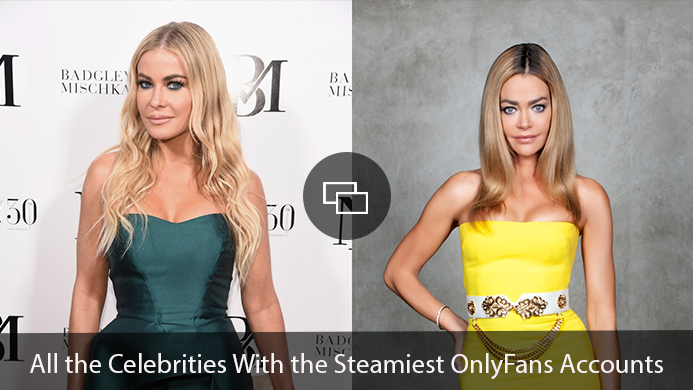