Once again, Kate Middleton honored her late mother-in-law Princess Diana in a very touching way that everyone couldn’t stop buzzing about. During this year’s Earthshot Prize event, Kate wowed everyone while dazzling in one of Diana’s favorite jewelry pieces.

On Dec 2, stars came from all over, along with Prince William and Kate to attend this year’s green event of the year: the Earthshot Prize 2022. No one could take their eyes off of Kate and William when they stepped out in this long-awaited event, with everyone fawning over Kate’s show-stopping, sustainable-friendly ensemble.

See the photos below:

For the event, guests were asked to wear more sustainable clothes, with the invite saying to “avoid buying new clothing; if a new item is required, consider sourcing vintage, recycled, consignment, or sustainably produced clothes.” And Kate understood the assignment.

As you can see, Kate looked absolutely stunning in The Sabina Maxi Dress in Bright Green from Solace London, which she rented for around $100 on the renting platform Hurr. Along with that, she looked radiant in her iconic soft wave hairstyle, a smokey eye look on the eyes, with blush and highlight wherever she could place it.

But what really stole the show was the jewelry she paired her look with. Along with some matching sparkling, emerald earrings, Kate wore the ever-so-iconic Delhi Durbar Emerald Choker, a piece of jewelry Diana wore on many occasions throughout her time as a royal family member. This Art Deco emerald necklace was a gift to Queen Mary Dehli Durbar, or Court of Dehli, and it was later known as one of the most worn jewelry pieces by Diana.

Diana wore it most notably as a choker during her visit to the Tate Gallery in London in July 1997, and as a headband in 1985 during a dance in Melbourne during a Tour of Australia. Per The Royal Watcher, she also wore it at a charity concert at the Barbican in 1982, a film premiere weeks later, the 1988 Banquet at Claridges, the Diamond Ball at the Royal Lancaster Hotel in 1990, and at a Banquet hosted by the King of Malaysia at the Dorchester Hotel in 1993.

Kate frequently honors those she looks up to and adores with the jewelry she meticulously chooses for each event. So it makes sense she wore one of Diana’s favorite pieces for an event all about being green, a cause Diana held very dearly to herself.

William established the Earthshot Prize years ago to promote finding and awarding solutions to repair our planet in sustainable ways. This year, they held the long-awaited event at the MGM Music Hall at Fenway, awarding over $1 million in prize money as they partnered with the John F. Kennedy Foundation.

Before you go, click here to see everyone who arrived at this year’s Earthshot Prize: 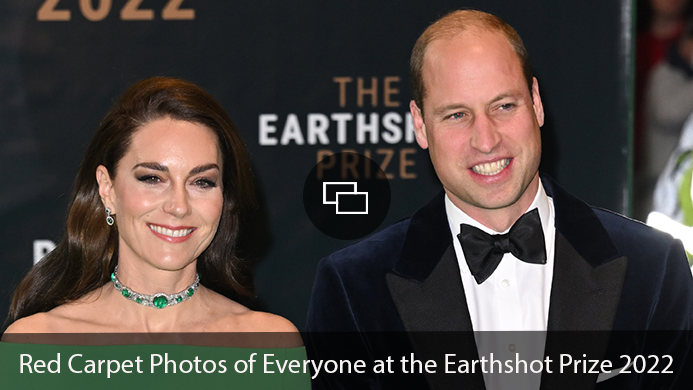