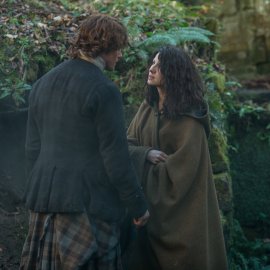 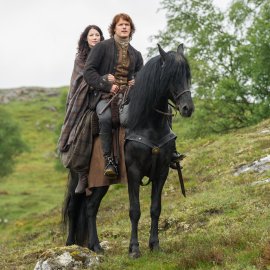 Anyone who purchased Outlander‘s Season 6 home entertainment collection in September knows that there is a special clip about Sam Heughan as part of the bonus footage. His audition tape for the role of Jamie Fraser is included in the DVD extras — and it’s immediately clear he was born to play the character.

Wearing a gray T-shirt with a couple of buttons unbuttoned at the top, Heughan stood in front of a blue background. His charming smile and boyish good looks were on display the moment he appeared on camera. Executive producer Maril Davis recalled what that moment was like in an exclusive clip shared with Entertainment Tonight. “I remember we were at our offices in Pasadena. You’re watching tapes and on the first round of casting, Sam’s audition tape came up and we watched it, and we all realized in that moment that this was our Jamie,” she said. “And all along we assumed we’d never find him. It was like a needle in a haystack. He just popped out right away.”

She added that they “instantly knew” Heughan was right for the role because he possessed “the charisma,” “the charm,” and “the humor to play Jamie.” She and producers later did a video interview with him and that sealed the deal — the role was his. “Sometimes in this life, there are certain actors out there who were born to play certain parts and Sam Heughan was born to play Jamie Fraser,” Davis shared.

Heughan, and the rest of the cast, is already working on the seventh season, and he gave an update in mid-September. “End of another block of shooting! Halfway through the season. Some really special moments and epic scenes,” he tweeted. “Season 7 will be [worth] the wait…!” Davis has already called the upcoming Outlander season “supersized” with 16 episodes expected to premiere in late 2022 or early 2023, according to Deadline. We can’t wait!