After Queen Elizabeth passed away on Sept. 8, tributes poured in for the royal from all over the globe. Foreign leaders, celebrities, and family members honored her legacy, but there was one particular eulogy that received quite a bit of attention — it was from Donald Trump.

The former president had high praise for the Queen, calling her “a grand and beautiful lady” in his Truth Social post. While some people read his message as sincere condolences, the Daily Beast reported that Donald Trump was “angling for an invite” to the funeral. If a trip to the UK is what he was looking for, he shouldn’t hold his breath because, according to Politico, there are strict protocols when it comes to the the invite list — and Donald Trump isn’t on it.

Donald Trump just announced whether his daughter Ivanka would be his running mate. https://t.co/DYepm3vTg5

Space is limited in Westminster Abbey, and because the Queen was in power for 70 years, they can only accommodate current world leaders. “Questions have been asked in the US over whether Donald Trump will be invited but British sources have scotched the idea that he could accompany the US delegation and said there would not be space for Biden’s predecessors,” a source told The Times of London. Even for the leaders, like Joe Biden, who are invited, it’s not VIP accommodations.

According to the Daily Beast, “Foreign dignitaries have also been asked to fly commercial to the U.K., to avoid using helicopters and told they will be required to get to the venue, Westminster Abbey, by a shuttle bus rather than their state cars.” That should be an interesting ride to the funeral if the transportation scenario plays out this way. As for Donald Trump, he will have to hold “Her Majesty’s generous friendship, great wisdom, and wonderful sense of humor” in his heart because he will not be able to pay his respects in person.

Before you go, click here to see every time Queen Elizabeth has met the US Presidents! 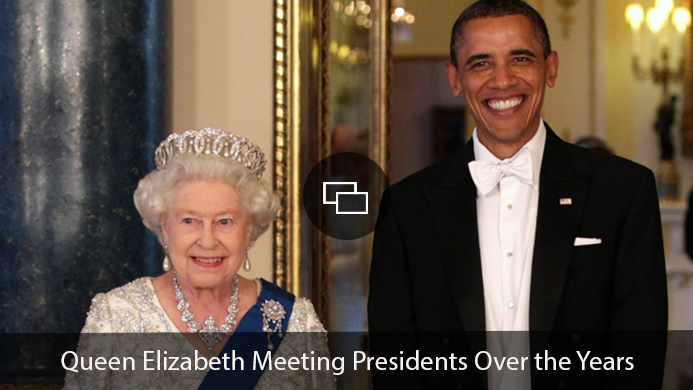