Barack and Michelle Obama made a very friendly visit to the White House on Wednesday to unveil their official portraits. They were welcomed back to 1600 Pennsylvania Avenue by President Joe Biden and First Lady Dr. Jill Biden, along with the White House Historical Association.

The portraits, Barack Obama’s painted by Robert McCurdy and Michelle’s by Sharon Sprung, were met with wondrous gasps from the audience, who loved the stunning artwork. Dressed in a gorgeous ombre red dress, Michelle looked emotional as it was the duo’s first joint return to the White House since they moved out in 2017. The Obamas applauded the artists and then turned to each other as Michelle playfully poked Barack Obama. He leaned in and gave her a sweet kiss on the cheek while she tenderly closed her eyes. The love between the two of them shined through in that brief moment in front of the press.

Barack Obama was in a joyful mood as he joked during his speech praising McCurdy about one of his famous fashion moments when he was president. “What I love about Robert’s work is that he paints people exactly the way they are, for better or worse,” he laughed. “You’ll note that he refused to hide any of my gray hairs, refused my request to make my ears smaller. He also talked me out of wearing a tan suit.”

The couple’s White House portrait is more formal than the two paintings residing at the National Portrait Gallery at the Smithsonian Museum, which was a hot Twitter topic when they were unveiled. That artwork is currently at Boston’s Museum of Fine Arts through the end of October and will return to Washington, D.C. in early November.

Before you go, click here to see the sweetest photos of Barack Obama with his daughters Malia & Sasha! 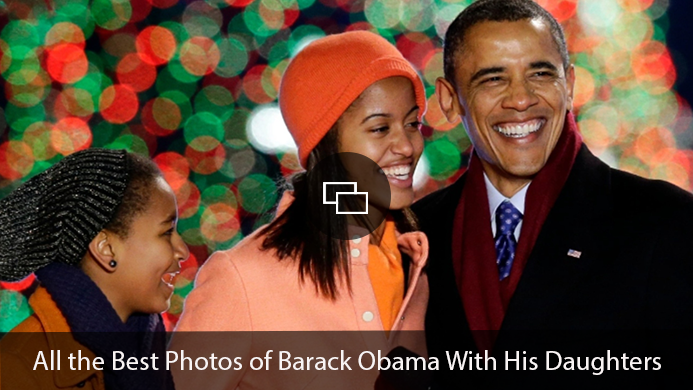