Monday’s Don’t Worry Darling press conference, red carpet, and screening at the Venice Film Festival had more drama going on than a daytime soap opera. The real-time play by play was happening over Twitter and it was hard to keep track of all of the feuds. For now, let’s just focus on Olivia Wilde and Harry Styles, who acted like they didn’t even know each other.

The duo, who began dating while shooting the film, has been an inseparable pair — from his concert tour this summer to loved-up New York City dates as recently as mid-August. Yet in a very romantic city like Venice, Italy, they looked like they would rather have a root canal than stand next to each other. This is a big pivot from their reported PR strategy of showing off “PDA and speaking about each other publicly” during the press promotion for the film. Is their new game plan to keep their relationship off the radar because of the swirling controversies or did a breakup possibly occur?

Wilde and Styles were seen briefly interacting after the screening. They exchanged a few words that seemed void of emotion, and then the “As It Was” singer passionately greeted co-star Nick Kroll and gave him a very enthusiastic kiss on the mouth. It was such a jarring contrast to the moment that happened before with his supposed girlfriend — it had everyone talking. Some Twitter fans were on Wilde’s side, writing, “if they did indeed break up i legit feel sorry for olivia because despite all the extreme harassment she suffered, she has always supported harry loud only for him to so blatantly ignore her?” While others were supporting Styles, adding, “Did Harry Styles just drop the soft launch break up with Olivia Wilde?”

However, one fan came with receipts and showed a clip of Wilde and Styles hanging out together after the red carpet. (See the video HERE.) It looked like casual and relaxed moment, “Harry Styles and Olivia Wilde were together after the red carpet , there is no tension between them at all , they didn’t break up please,” they wrote. So perhaps the glare of the spotlight with fans keeping track of every micro-interaction is just too much — it’s easier to keep their relationship off the red carpet and let the rest of the drama play out on its own. 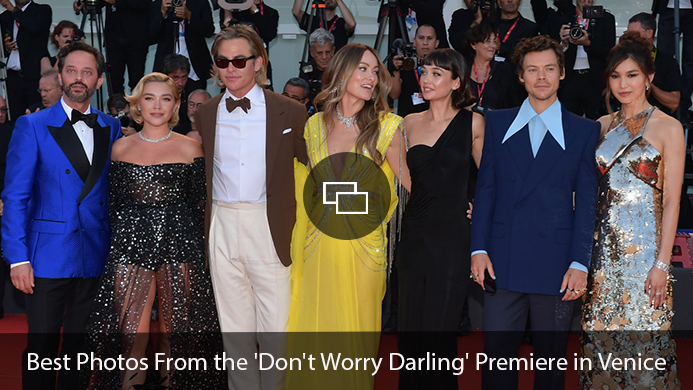