After playing what is likely to be the final tennis match of her career last Friday at the US Open, Serena Williams took to Instagram to share what the beginnings of life after tennis are looking like for her and her family.

Related story Hugh Jackman, Eva Longoria, & More Stars Who Showed Up at This Year’s US Open

In an adorable Instagram post of the legendary athlete snuggled up in bed under a vibrant-colored Moana blanket — you know, #momlife — Williams wrote, “How was your weekend? This was mine ….” Fans and friends alike showed up in droves in the comment section, cheering on Williams just as hard as they would if she were on the court. Naomi Campbell sent love to the athlete via several heart emojis; Katie Couric wrote “Love it! You deserve it!!!!,” and Lin-Manuel Miranda shared a thoughtful poem, ending with “Rest up, champ. You’ve beyond earned it. New adventures await!”

Williams’ husband, Alexis Ohanian, also took to his Instagram Story to share a few sprinkles of how life is looking for the athlete as she begins her evolution away from tennis, and it included a wholesome afternoon of baking with their 5-year-old daughter, Olympia.

Sharing her plans to evolve away from tennis in an emotional essay published in Vogue, Williams sited her wishes to grow her family and pursue other passions in life beyond the game. In her words, she announced, “I’m here to tell you that I’m evolving away from tennis, toward other things that are important to me.”

She vulnerably shared that the idea of retiring brings her no joy; in fact, she feels cheated at having to stand at a crossroads between her personal and professional desires. Williams wrote, “If I were a guy, I wouldn’t be writing this because I’d be out there playing and winning while my wife was doing the physical labor of expanding our family. Maybe I’d be more of a Tom Brady if I had that opportunity.”

She went on to muse about her desire to continue building her exceptional tennis résumé: “I had my chances after coming back from giving birth. I went from a C-section to a second pulmonary embolism to a grand slam final. I played while breastfeeding. I played through postpartum depression… I showed up [to win a grand slam] 23 times, and that’s fine. Actually it’s extraordinary. But these days, if I have to choose between building my tennis résumé and building my family, I choose the latter.“

Williams closed with what she hopes for her future, “that people come to think of me as symbolizing something bigger than tennis… I’d like it to be: Serena is this and she’s that and she was a great tennis player and she won those slams.” Here’s to getting to know Williams as a woman, mother, and businessperson after all she’s accomplished as the greatest tennis player of all time.

Before you go, click here to see all of Serena Williams’ epic grand slam championship wins! 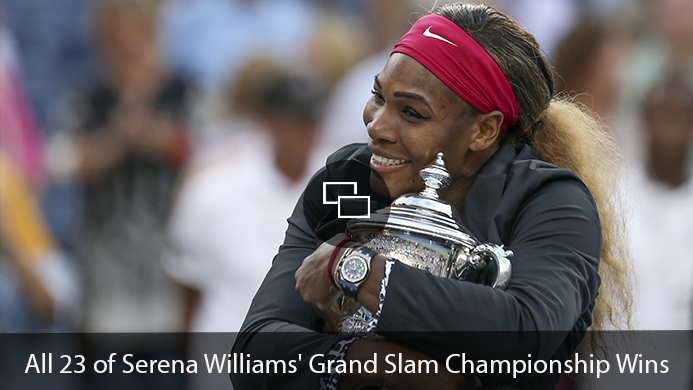