Malia Obama was spotted out and about on Wednesday enjoying a visit to The Los Angeles County Museum of Art, but she wasn’t alone. The oldest daughter of Barack and Michelle Obama was enjoying the afternoon outing with a male pal — and it might be a date?

The friends were caught by TMZ cameras in matching outfits — green bottoms and light-colored tops  — to combat the hot temperatures on the sunny day. (See the photos HERE.) They walked arm in arm as they crossed the street and shared a few joyful moments in front of the paparazzi’s lenses. Malia never held hands with the mystery man, so it could have been a friendly hug between buddies — but what if it is blossoming love affair?

Malia does her best to keep her private life off the radar, which is hard to achieve now that she’s living in LA and working in the entertainment industry. The last anyone knew about her dating situation, she was still with her Harvard University boyfriend, Rory Farquharson, who hails from the U.K. They began dating in 2017, but the last sighting of the two of them together seems to be in November 2021. It wouldn’t be out of the realm of possibility that she broke up with her longtime boyfriend since college romances don’t always last.

The 24-year-old TV writer is probably praying her mom doesn’t go on a talk show and dish about her possible new beau. That’s what happened to her sister Sasha, 21, when Michelle went on The Ellen DeGeneres Show in late April. After joking that her daughters no longer worship the Jonas Brothers, the former first lady gossiped, “Now they are bringing grown men home. Before it was just pop bands. Now they have boyfriends and real lives.” It only took a bit of sleuthing to discover her youngest daughter was dating Clifton Powell Jr. If Malia has any say in the matter — and if this is a new romance — she’s probably begging Michelle to keep the personal info to herself.

Before you go, click here to see the best photos of Malia Obama. 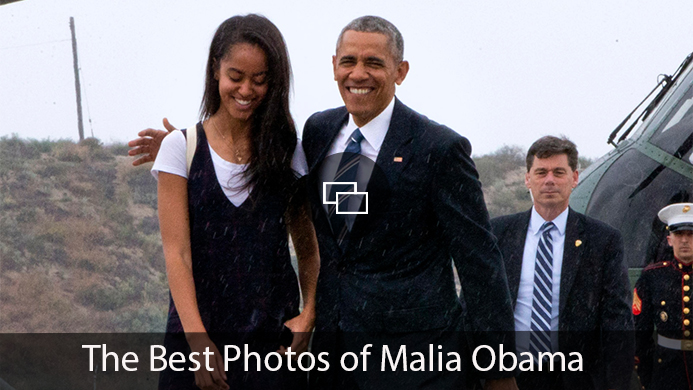 16 hrs ago
by Federica Bocco