Sasha and Malia Obama look like they’ve officially made Los Angeles their new home after eight years in Washington, D.C. The tight sisters were spotted at Los Angeles International Airport (LAX) on Wednesday doing something most LA residents dread: the airport pickup.

LAX is off one of the busiest freeways in the U.S., so picking someone up, especially during rush hour, is an act of love. Sasha swung by the arrivals area to scoop up her big sis instead of making her take an Uber, as most Angelenos would. She even looked happy to do so — no road-rage face in sight. (See the video HERE.) As Malia approached her 20-year-old sister’s car, Sasha jumped up and down and danced in delight at the sight of her screenwriter sis. They embraced in a warm hug that would make any parent proud that they raised such close siblings. And then, Sasha placed Malia’s suitcase into the back of the hatchback — talk about a full-service experience!

The paparazzi was trying hard to get Malia to answer questions, but the 23-year-old writer decided to ignore the burning hot topics she was asked. We don’t blame her for jumping into the car without answering, “What is your favorite summer fruit?” We are way more interested in the fact that Sasha has a pink fuzzy steering wheel — talk about a stylish vehicle choice. The young women have also been establishing their fashion choices now that they live in LA with Sasha going for glam, and Malia choosing a breezy, casual look.

With the paparazzi taking a serious interest in their LA presence — and their love lives — it’s likely we will learn more about the Obama sisters in months to come. Let’s hope they are ready for the glare of the Hollywood spotlight.

Before you go, click here to see our favorite photos of grown-up Malia Obama living her best life. 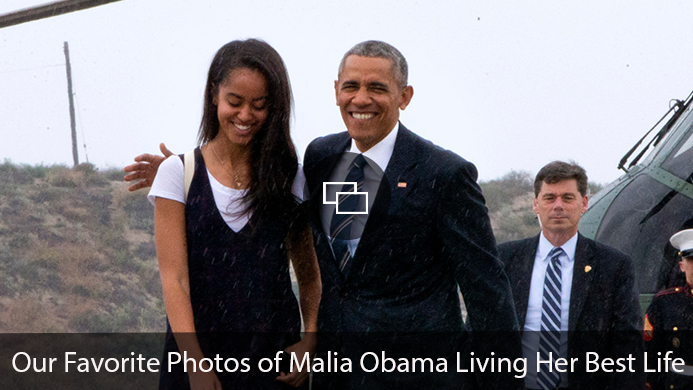