When First Lady Dr. Jill Biden opened the Metropolitan Museum of Art Costume Institute’s latest exhibition, it was clear that the ongoing snub of former First Lady Melania Trump was still in full effect. The current exhibit, “In America: An Anthology of Fashion,” is curated by Vogue‘s editor-in-chief Anna Wintour, and Jill Biden speaking hours before Wintour’s biggest event of the year — the Met Gala — was an honor also enjoyed by Michelle Obama in 2014 when she was the first lady. This was not the type of engagement extended to Melania while she was in the White House, however, because her relationship with the magazine was known to be quite frosty.

In addition to not inviting Melania to speak before the Met Gala, Vogue has a Melania-shaped hole in one other notable area. The publication’s “First Ladies in Vogue” feature glaringly omits Melania because she never posed for the magazine while husband Donald Trump was in office — but it didn’t have to turn out that way. According to longtime Vogue staffer and former friend Stephanie Winston Wolkoff in her tell-all book Melania and Me: The Rise and Fall of My Friendship With the First Lady , Melania was offered a feature interview, but there was no “guarantee that Melania would appear on the cover,” she wrote. That may sound unfair to Trump fans, but not every First Lady was given the cover of the magazine.

Can't wait for Showtime's #TheFirstLady? Read up on the adventures of first ladies over the years with these best-selling biographies. https://t.co/Kvrfn3sVZm

“For the record, not all First Ladies are put on the cover of Vogue. Michelle Obama and Hillary Clinton, yes. Laura and Barbara Bush, no,” Winston Wolkoff added. “Melania wasn’t going to do anything for Vogue or any other magazine if she wasn’t going to be on the cover. ‘Give me a break!’ she texted. ‘Forget it.’” That’s exactly why we don’t see Melania in the First Lady photo archives in Vogue.

It’s evident that she was also skipped for the Metropolitan Museum of Art exhibition opening that Jill did on Monday, May 2 and that Michelle attended in 2014. These omissions may seem small, but they speak volumes about the tumultuous Trump era — places where we often see the First Ladies, like Vogue and Sesame Street, were not a part of Melania’s time in Washington, D.C. In the end, it was Wintour’s decision to make, despite the criticism from Trump supporters. “You have to stand up for what you believe in,” she told CNN in 2019. “And you have to take a point of view.”

Before you go, click here for a look back at the Trump family’s many years attending the Met Gala. 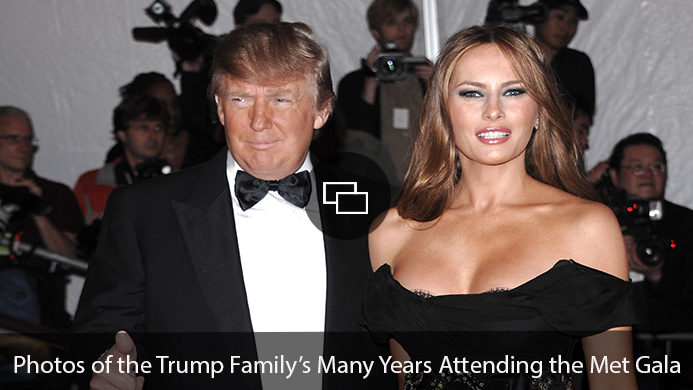