Just like the beloved song in West Side Story goes, “something’s coming. Something good!” After months of waiting, audiences who didn’t get the chance to see director Steven Spielberg’s iteration of West Side Story in theaters will finally be able to stream the film in the comfort of their own homes. Since its premiere in December 2021, the film has earned wide acclaim. Between the craft behind how the film was made and the rousing performances from some of Broadway’s best and new, burgeoning talent, this is a film you simply can’t miss. And we can tell you how to watch the Oscar nominee for Best Picture this week.

Related story How To Watch The Marvelous Mrs. Maisel — See The First Episodes of Season 4 for Free

West Side Story is a timeless tale generations of audiences have come to know and love. Spielberg, himself, has spoken effusively about how much he loved listening to the music when he was young, as well as how much he’s always wanted to adapt the musical to the screen. Of course, nothing will ever fully replace the initial film adaptation. The 1961 film earned 10 Oscars out of 11 nominations at the 1962 Academy Awards, including Best Picture, Best Actress in a Supporting Role (Rita Moreno), Best Actor in a Supporting Role (George Chakiris), Best Director (shared between Robert Wise and Jerome Robbins), and so many more.

Spielberg’s 2021 incarnation pays respectful homage to the 1961 film, its musical roots, and honors the timeless tale for a new generation. Here, we’ll break down everything you need to know about 2021’s West Side Story, how and where to stream the film, and more.

What’s West Side Story about?

West Side Story is based on the musical of the same name, which debuted on Broadway in 1957. The show featured music by Leonard Bernstein and lyrics by Stephen Sondheim. The book was written by Arthur Laurents; the concept was by Jerome Robbins. The musical, which included original cast members like Chita Rivera (who originated the role of Anita), received positive critical responses. The choreography in particular became a major highlight for the show, and it quickly garnered enough attention for a film adaptation.

The 1961 film followed the same storyline as the musical: warring gangs The Sharks (with members from Puerto Rico) and The Jets (made up of ethnically white members) fight over turf in the Upper West Side of New York City in the late ’50s. As this battle ensues, Maria, the younger sister of Sharks leader Bernado, and Tony, a former member of the Jets, fall in love instantly at a dance between the rival groups.

The story draws on the star-crossed love story of Shakespeare’s Romeo & Juliet, as well as commentary on the American Dream, immigration, identity, and more. Each element of the story still resonates more than five decades later. For their part, director Steven Spielberg and screenplay scribe Tony Kushner pay tribute to the original while imbuing this iteration with their own care and the verve of its vibrant cast.

Who stars in West Side Story?

Unlike the 1961 film, which featured established stars like Natalie Wood and Richard Beymer as Maria and Tony, the 2021 adaptation sought the talent of Broadway stars and burgeoning new talent — along with some beloved veterans. First, let’s talk about the new guard: Ariana DeBose has received near-universal acclaim for her portrayal of Anita. The actress has roots in Broadway, earning a Tony nomination in 2018 for Best Featured Actress in a Musical for Summer: The Donna Summer Musical. DeBose recently won the SAG Award for Best Performance by an Actress in a Supporting Role. She’s also earned a BAFTA, Critics Choice, and Academy Award nod for the respective category, too.

Along with Broadway’s DeBose, Tony winner David Alvarez plays her Bernardo. Alvarez became one of the youngest Tony Award winners in history when he, along with Trent Kowalik and Kiril Kulish, won the Tony Award for Best Actor in a Musical for Billy Elliot the Musical. Alvarez took a hiatus from the stage and screen before finally returning for West Side Story. Along with these aforementioned stage stars, Mike Faist plays Riff of The Jets in the 2021 film iteration. In 2017, he earned a Tony nomination for Best Actor in a Featured Role in a Musical for Dear Evan Hansen.

While Spielberg pulls a lot of his talent from Broadway, he also put out a casting call for the 2021 film’s Maria. At just 16 years old, Rachel Zegler responded to the open casting call and earned the role of Maria over thousands of other applicants. She was officially cast at age 17. Opposite Zegler’s Maria is Ansel Elgort as Tony, known for The Fault in Our Stars, Baby Driver, and other films. But West Side Story wouldn’t be the same without one person in particular. Rita Morena offered her stamp of approval on the film and also has an important role in the movie as Valentina, the widow of store owner Doc — a character who originally appeared in the 1961 film and musical.

How to watch West Side Story on Disney+

Now that we’ve given you a crash course in all things West Side Story, it’s time for the part you’ve been waiting for: how to watch the 2021 film. Lucky for longtime fans or new audiences of the timeless story, there are two ways you can watch West Side Story. While each comes with its own set of extras and exclusive content, neither is free. But we think either option is well worth the price. First up is Disney+.

West Side Story debuts on Disney+ this Wednesday, March 2. For those who don’t already subscribe to the streaming platform, Disney+ features a $7.99 per month payment plan, or $79.99 per year plan. Either way, you’re getting access to exclusive Disney+ content. From Marvel’s latest superhero movies, to classic DCOMs, animated classics, new releases, and more — there’s a lot to love about Disney+.

How to watch West Side Story on HBO Max

If Disney+ isn’t your jam, don’t worry. There’s another option to stream West Side Story at home this week. The film will debut on HBO Max this Wednesday, March 2, as well. Similarly to Disney+, HBO Max offers subscribers exclusive content. You can watch original HBO series like The Gilded Age, HBO classics like The Sopranos, and plenty of movies such as The Last Duel, Clueless, In The Heights, and more. You can even watch the 1961 iteration of West Side Story on HBO Max.

Like Disney+, HBO Max doesn’t offer a free trial either. Instead, the streamer features two monthly and two annual plans you can choose. The monthly plan with ads is $9.99 per month; without ads the price goes up to $14.99 per month. If you prefer an annual payment plan, there’s currently an option for $99.99 per year with ads and $149.99 per year without ads.

Like we said, if you already subscribe to HBO Max, you can watch West Side Story (1961) on the streamer. But, if you’re just curious about seeing the film for the first time, or revisiting the 1961 adaptation after a few years, you can rent the movie on Amazon Prime Video for $3.99.

Before you go, click here to see photos from the original ‘West Side Story.’ 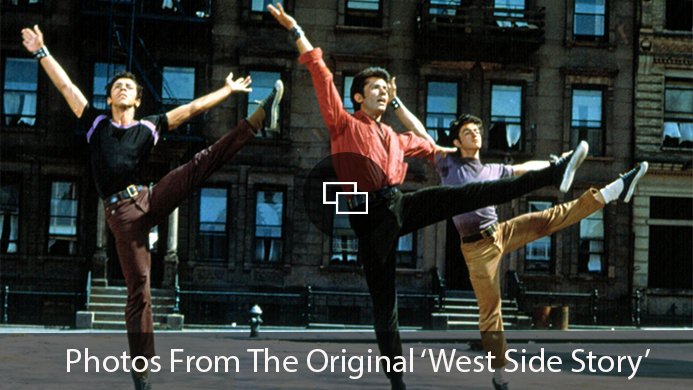