As one of the year’s most highly anticipated films hit theaters in less than three days, everyone is talking about Halle Berry. We’re so excited about her role in Moonfall, her iconic interviews, and, of course, the stunning LBD she wore to the Moonfall premiere.

On Jan. 31, the stars of the sci-fi film came to wow the crowd with their stylish ensembles — and of course, Berry stole the show with her flirty mini-dress. While many showed up in darker outfits, the former Beauty Pageant queen decided to wear a flirty take on the little black dress trend, by wearing a ruffly plunging dress from the Philosophy collection by Lorenzo Serafini LBD. The Bruised director also wore satin Maya Lakis mules and put her hair in a stylish updo.

Moonfall is a sci-fi disaster film that follows two astronauts (played by Patrick Wilson and Halle Berry) and a conspiracy theorist (played by John Bradley) during their trek to space. While there, they realize something is wrong with our moon and that it’s supposed to collide with the Earth. They have to figure out how to stop it and end up finding more than they bargained for. It will premiere in all theaters in the US on Feb 4.

Now, according to the director Roland Emmerich, Berry’s character Harper was originally written for a man. He told Entertainment Tonight, “It was more male-oriented and then we kind of said to ourselves, ‘Why can’t it be a woman?’ And then you say, ‘Who’s kind of cool in a way [that works for this film?],’ and then we come relatively fast to Halle Berry.”

When approached, Berry immediately agreed — and the rest is history.

It’s no secret that we love Berry, and we can’t wait to see her rock this film as hard as she rocked the red carpet. 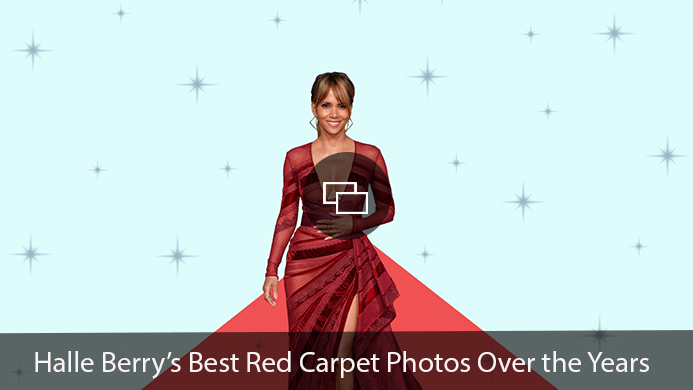