The season 6 trailer of Outlander is here. And we are now a delightful combination of stressed, excited, and stressed. Is it March 6th yet?! Judging from the trailer, Outlander’s newest season promises to bring us the signature drama and love we expect from Jamie and Claire Fraser no matter what time they are in. Caitríona Balfe, Sam Heughan, Sophie Skelton, Richard Rankin, Lauren Lyle, Cesar Domboy, and John Bell all return for season 6. And they’re joined by newcomers Jessica Reynolds, Alexander Vlahos, and Mark Lewis Jones at the Ridge as the Christie family. They look like trouble. Real trouble. So let’s break down the trailer. All 2 minutes and 10 seconds of it. Watch below and read on for our full analysis.

The trailer starts off pleasantly with a happy Jamie and Claire, a happy Roger and Brianna, and even a happy Ian, who looks smitten with the new girl on the Ridge, played by Reynolds. Fergus and Marsali look sort of happy, but also there’s an ominous tone there. Seems like Marsali has given birth to yet another baby. Really Claire? You brought penicillin to the 1700s, but couldn’t whip up some birth control? Or Brianna, you’re an engineer! You made a syringe out of snakeskin, how about making a condom out of that snakeskin. The tag line could be when your snake wants to rattle…. Moving on. Brianna can handle her own marketing. Back to the trailer…

Next, we see the British Redcoats rolling up to the Ridge with a horse carriage full of long guns. And Claire says, “It’s starting. If only they knew what was coming”  And she is no doubt talking about the incoming Revolutionary War. So we got 17 seconds of happiness. And then a reminder that Jamie and Claire on currently on the side of the British and history spoiler alert, the British are about to lose that war, big time.

Next up, we hear, “It would be a shame if our Indian neighbors became our enemies.” Young Ian tells Jamie, “If you won’t help them, I will.” Jamie will never not help someone, this we know. And then Claire says ominously, “The tide has turned.” Girl, why did you NOT bring a history book back in your big-ass dress when you returned in season 3?! Or at least some pages from this time period?!

Jamie tells Claire, “I cannot be two things at once.” And that pretty much sets up the conflict for the season. Jamie and Claire are on the wrong side of history again. Claire says to someone, whom they don’t show, “You can’t live your life afraid of being who you are.” My guess is it’s Brianna, because she really has a mom tone when she says it.

Then we see Roger and Tom Christie pushing a large bell up a hill. Hold up. Roger’s beard. Wow. Let’s talk about this. It’s so big. SO BIG. It has handlebars. Why?! Who told Roger that looks good?! Handlebars belong on a bike, not in hair form on your face! The only person who could carry off such an enormous mustache is Tom Selleck. It also makes Roger look like Jamie’s dad. I hope Jamie shaves it. (What?! He shaved Roger last season on his wedding day, he should do it again).

Fergus and Marsali and their baby appear again, and Fergus looks like he’s had a rough night. Brianna is then shown looking very concerned and angry. And all of a sudden, Jamie’s got a gun. (Someone out there, please sing that lyric). He then says to Christie, “If you are staying at Fraser’s Ridge, then my word is law.” And one of the Christies, played by Vlahos, is thrown down to the ground.

Then Roger, Brianna, and Jemmy are walking through the woods, seemingly happy — but then through his gigantic beard, Roger says, “If America doesn’t become America, who knows what that world will look like.” And then, it all goes to hell. Gunshots, windows breaking as Claire screams “Jamie!” while Richard Brown (whose now-dead brother led the brutal attack on Claire last season) is about to shoot Jamie. It does not look good for James Alexander Malcolm Mackenzie Fraser.

The most stressful part of this trailer — besides all of it — is when Claire says this line, and is clearly saying it to Jamie, and she seems mad, like the kind of mad you don’t want your spouse to be. Are they fighting? Are Jamie and Claire fighting?! Stay calm. *She says to herself.* Okay, here’s the line: “I don’t belong here. Brianna, Roger, they don’t belong here. But yet here we are. All of us. Because I loved you. More than the life that I had.” Oh. My. God. This all plays over what looks like a war starting on the Ridge, Jamie and Claire in bed, and many other anxiety-inducing scenes.

The good news is, in between all the shooting and war and general stress, Jamie and Claire find some time to do what Jamie and Claire are best at. I’m winking. After each traumatic scene, they show a snippet of different love scenes between the frisky Frasers. What’s funny is, if my grandparents had as much sex as these grandparents, I would not think that is cool. In fact, I would think it was very uncool. Plugs ears forever. But somehow Balfe and Heughan portraying grandparents who have a very active sex life is fine with me. Fine. They are the only grandparents allowed to do that. Thank you.

The trailer ends with Claire kissing Jamie as she says, “And this I promise you, won’t come between us.” Does anyone else think that, whatever it is, it does indeed come between them?! Side note: I like that Jamie and Claire always prioritize their sex life, even in the middle of a war. Never change, Mr. & Dr. Fraser. So yes, Season 6 promises to be packed, even though it’s a shorter season, it looks like they will be covering a lot of material from Diana Gabaldon’s book series
. 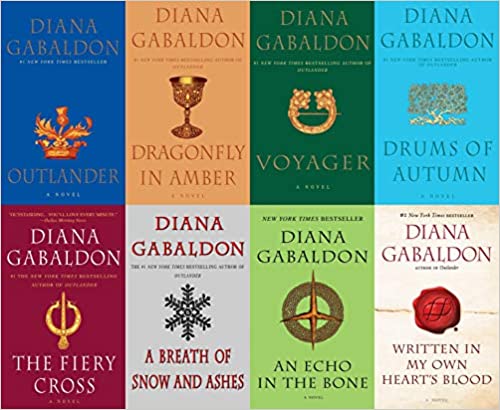 “Come to the Ridge,” they said. “It’ll be relaxing,” they said. It’s not relaxing and you definitely don’t want to come to the Ridge. All those in favor of Jamie and Claire going back to Scotland and the fam living their best lives at Lallybroch, say, “I.” I’m raising my hand and saying “I,” and no I do not feel foolish. That’s how much I want Jamie and Claire and all those Fraser offspring to not be in America. It’s the bad place for them — which became clear in the season 5 finale.

Season 5 ended on a highly stressful note if you recall, and if you don’t recall, and want to re-live the finale again, here’s the recap. Plus, Sophie Skelton exclusively discussed it with us in a two-part interview. In the finale, Claire went through one of the most horrific events in Outlander history (like Jamie did in Season 1 and Brianna in Season 4). Seriously, Outlander, give this family, and us a break. Oh nope, judging from that trailer we may not get that break. But we will get some drama with a side of trauma in a way only Outlander can do. And honestly, we cannot wait. The season 6 premiere is March 6th on Starz – that’s only 46 days away. You have time to binge all five seasons, if you start the minute you finish reading this. Or you can read all of our recaps on season 5 — they’re like Cliffs notes for the Frasers.