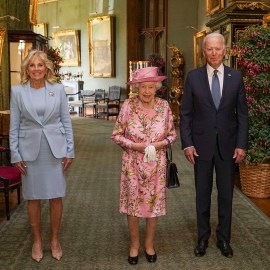 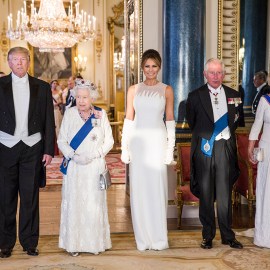 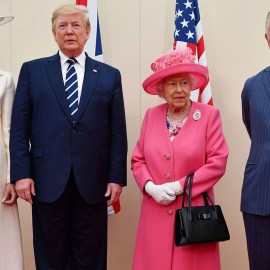 Throughout history, there’ve been so many meetings between the President of the United States and the reigning monarch of the United Kingdom. For Queen Elizabeth II, especially, she’s met with the head of state from America dating as far back as the Kennedy years and further. But at yesterday’s COP26 U.N. Climate Summit in Glasgow, Prince William was the senior member of the royal family to greet President Joe Biden, and the two shared a sweet moment caught on camera.

While greeting each other at the reception, President Biden rested his hand on the Duke of Cambridge’s shoulder. The president appeared to be smiling while chatting with Prince William, and though it was difficult to see William’s expression, we can’t help but think the pair were really bonding — perhaps they were discussing the Cambridges’ reported 2022 trip to America. More than anything, the photo showed how William, the future King of England, is really stepping into his senior role and duties with aplomb. His exchange with President Biden looked so natural, and we’re sure that the two will likely meet again in the near future.

But while the photo was very touching, and really spoke well to how Prince William is embracing his senior royal role, the task at hand was far more serious. COP26 U.N. Climate Summit is the United Nations conference held in Glasgow, gathering leaders from across the globe to discuss the shared challenge of climate change. Prince William, himself, has already been an incredibly vocal proponent of fighting the climate crisis with his Earthshot Prize, and using his platform to address what the next generation — including his own children — will deal with if global leaders do not act now.

Prince William was also joined by wife Kate Middleton, his father Prince Charles, and Camilla, Duchess of Cornwall. Like his father, Prince William is continuing to spotlight this global issue in creative, thoughtful ways. But his presence at the COP26 Climate Summit definitely struck a chord, and seeing him mingle with world leaders like President Biden gave us a clear vision of how this future of King England will carry himself and the royal family into the next chapter.