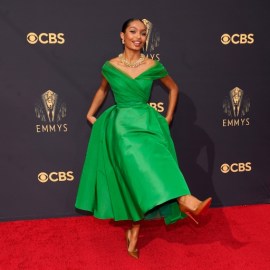 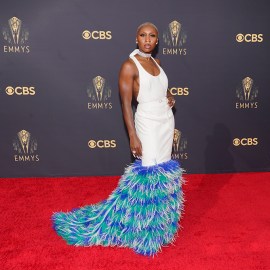 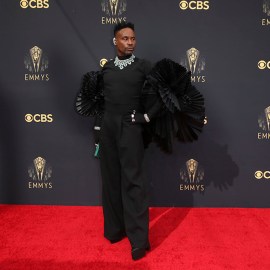 It’s time for the Primetime Emmy Awards, and the stars were seriously lighting up the red carpet in Los Angeles. For many attendees, this was their first red carpet appearance in months. And a number of stars made the decision to make the night a memory that will last forever by including their family, including Hacks and Mare of Easttown star, Jean Smart! The actress brought her child, Forrest, along as her date, and their sweet moment on the red carpet really pulled at our heartstrings.

“How proud are you of mom that she’s nominated?” Queer Eye star Karamo Brown, who served as an E! Live correspondent, asked. What Forrest said next really made our eyes well up with happy-tears. “Very proud of her, she really deserves it, she worked really hard for everything,” Forrest told Brown. “Those are the moments that make us as parents cry right there,” Brown sweetly said of the moment.

But Brown didn’t get all of the interviewing questions to himself. Smart, of course, asked her child her own inquiry that had to do with her time spent away while filming both of her Emmy nominated series. “When I commuted…for all those months, it was okay? I felt guilty about that,” the venerated actress said.

“No,” her child responded quickly. “I mean, it was okay…this was worth it. (You can watch the moment here!)

Smart, who already boasts three Emmy Awards, is nominated in two categories tonight. She earned a nomination for Outstanding Lead Actress in a Comedy Series for HBO’s Hacks as well as a nomination for Outstanding Supporting Actress in a Limited or Anthology Series or Movie for Mare of Easttown. During this past year, Smart also lost her husband of more than 40 years, Richard Gilliland, in March 2021, and we can’t imagine how important it’s been to her to keep her remaining family close.

Click here to see all the celebrities who have adopted children.