If you’ve ever listened to the lyrics of Lana Del Rey’s “Jealous Girl” and had a religious experience, you and Candace Cameron Bure might have something in common. The Fuller House star recently posted a video on both TikTok and Instagram of herself lip-syncing along to a snippet of the song. As Del Rey sings, “Baby I’m a gangsta too and it takes two to tango/ you don’t want to dance with me, dance with me,” Bure leans in toward the camera, holding up her Bible as the words “When they don’t know the power of the Holy Spirit” flash onscreen. Many fans thought her performance was inappropriately sexy and bizarre given the religious elements she added, but Bure said it was all just a misunderstanding.

Bure explained and apologized to those who thought her video was offensive in her Instagram Stories, saying: “I just came home and read a lot of messages that were not happy with my latest Instagram post that was a TikTok video,” said Bure, who deleted the clip on Instagram but left it up on Tiktok. “And I usually don’t apologize for these things, but a lot of you thought it was weird and I’m sorry. That was not my intention.”

“So many of you thought I was trying to be seductive, which clearly means I’m not a very good actress because I was trying to be strong, not sexy,” continued the actress, who got the idea for the video from a similar one her daughter Natasha, 22, posted on her own TikTok account. “Maybe I was just trying to be too cool or relevant in a Biblical way that didn’t work? Most of you didn’t like it, clearly. But there was a small percentage of you that appreciated what I did and understood my intention.” 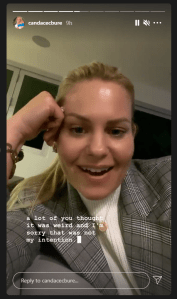 Bure was previously criticized for being too casual with Christ for wearing a shirt with the words “Jesus saves bro” on the front and for donning a Christmas sweater that featured both Santa and Jesus.

To respond to her critics on both sides, Bure wrote a 2016 motivational essay for Time‘s Motto in which she explained how she tries to navigate being a person of faith who is also an actress and performer.

“I’m very outspoken about my Christian faith, and I actually face a lot of pressure from others within the faith,” she writes. “When I was on Dancing with the Stars, for example, I was constantly hearing from people who thought that my costumes weren’t appropriate. On Fuller House, people were sad that my character made certain choices. Even with The View, people say I’m not speaking up enough for conservative values and that I allow myself to get walked on. Everyone has an opinion!”