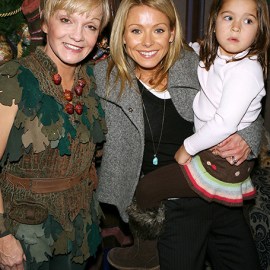 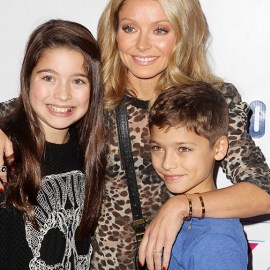 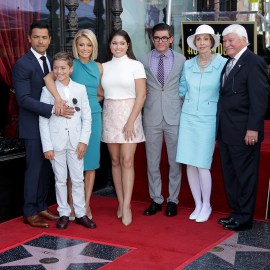 When it comes to Kelly Ripa and Mark Consuelos’ marriage of nearly 25 years (their wedding anniversary is this Saturday!), we’re not used to doing much except taking notes. But in a new interview with Marlo Thomas and Phil Donahue on podcast Double Date, Ripa and Consuelos revealed a side to their union that gave us pause — their surprisingly traditional roles as husband and wife and specifically, how that translates into both spouses claiming that, actually, Consuelos wouldn’t even be capable of traditional women’s work like finding a ballet class or decorating for the holidays. While we’ve always admired how they balance their high-powered careers with family and enjoyed the additional insight into how that dynamic unfolded, we think that Ripa can expect a little bit more from Consuelos. If she handles more of their home life, that should be because she genuinely prefers taking on that labor — not because she’s a woman and therefore the only one who’s capable.

Ripa and Consuelos opened up to Thomas and Donahue ahead of their upcoming anniversary to reflect on the early days of their marriage, back when they were both in their mid-20s, and how they’ve grown into the dynamic they have now as husband and wife. Both are upfront about the fact that they’ve always had “traditional” roles within their marriage (“I think of us as very traditional and almost old-fashioned in our roles,” Ripa says), but there’s one aspect to this tradition we just can’t get behind.

“I’ve been able to raise my kids here in this city, in the nest — and he’s always been willing to travel and go to a set and go off here and sometimes he’s had to go live in another country,” Ripa explains of their dynamic. “Traveling is hard and being away from home is hard and sometimes he would miss milestones for the kids and I know that was hard for him…He made those sacrifices. But I think he wouldn’t know how to find a ballet class! He wouldn’t know how to go about signing the kids up for religion classes!”

While Consuelos jumps in at one point to note that “some would say you made the sacrifice,” he also alludes to the idea that there are certain kinds of work he’s simply incapable of taking on.

“She makes the home a home,” he added of Ripa. “Every holiday, we would have nothing if it was up to me.”

To be clear, father of three Mark Consuelos is absolutely capable of putting up holiday decorations, remembering his dad’s birthday, and signing his kids up for extra-curricular activities (even ballet!). What’s more, it sounds like this is a division of labor they opted for because it aligned with both their preferences and enabled them to find the kind of balance they wanted — and it undervalues both Ripa and Consuelos’ contributions to pretend these things just come naturally to her and could never be fulfilled by him.

“I wanted to raise my kids. I didn’t want to have them and never get to see them and the talk show afforded me this opportunity where I would work in the morning, early in the morning, and then I would have the rest of the day to take them to their activities or be there and watch the ballet recital, be there and do all of those things,” Ripa says — and that’s a wonderful reason all on its own for why they structured their lives this way.