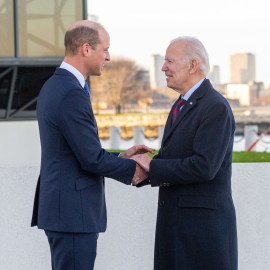 Her Majesty Elizabeth II, by the Grace of God, of the United Kingdom of Great Britain and Northern Ireland and of her other realms and territories Queen, Head of the Commonwealth, Defender of the Faith…and CEO? That’s essentially the argument of new True Royalty TV documentary Elizabeth at 95: The Invincible Queen, which features business and brand experts analyzing how the brand of the British royal family has evolved under the monarch’s reign — and how she and the late Prince Philip, Duke of Edinburgh acted expediently throughout history to protect the brand value of the “Firm.” Per these calculations as recorded in Vanity Fair, the royal family is estimated to have a brand value of $100 billion, while the Queen’s personal brand is estimated at around $50 billion. Through a combination of savvy PR and shrewd agreements with lawmakers, this documentary argues that Queen Elizabeth II isn’t just England’s longest-reigning monarch — she’s also its most profitable.

One expert the documentary cited — David Haigh, the CEO of brand valuation consultancy Brand Finance — explains how they arrived at these calculations for the Queen and BRF.

“The Royal Family refers to itself as ‘The Firm’. So, when we began analyzing the financial performance of the monarchy, we took that same phrase and tried to value it as a firm,” he explains. “And we estimate the value of the business at about £70 billion, which is about $100 billion. That puts it as the most valuable UK brand. It’s a more valuable brand than Shell, for example, or Marks & Spencer and many other UK brands.”

Brand consultant Kubi Springer offered another way to think about the staggering value of the Queen’s $50 billion brand specifically: “Nike, Ferrari and Coke, when you combined those brands together, the Queen’s brand has more articles than those three combined, which is really powerful.”

Find out why the Queen won’t cut ties with Meghan Markle as she did with Princess Diana. https://t.co/ldv5O7x9vZ

Public perception is key to keeping this brand value high, experts attest, and Alastair Campbell, former director of communications for Prime Minister Tony Blair, praised the Queen’s recent public response to Meghan Markle and Prince Harry’s Oprah interview as an example of how she sustained the public’s high favor.

“That 300-word statement [reacting to the Oprah interview] was pitch perfect, for what she was trying to do,” Campbell says on Elizabeth at 95. “‘Recollections may vary’ was brilliant.”

The statement offered grace without admitting guilt, toeing a line in a manner to which the Queen has become accustomed after all these years. The question then becomes: What will happen to the royal family’s brand value when Prince Charles ascends to the throne? His infidelity during his marriage to beloved Princess Diana and his subsequent marriage to Duchess Camilla, the woman with whom he had the affair, made him a pariah to the public, and for all the royals’ PR efforts, they’ve never quite repaired it.

While Forbes notes that Charles enjoys an impressive personal fortune, his negative PR as well as Meghan and Harry’s accusations of racism within the royal family are both huge red flags that could bring the royal family’s brand value soaring downward; meanwhile, Prince William and Kate Middleton, Duchess of Cambridge enjoy high brand value but less revenue at present than his father.

At a time when the future of the royal family has never seemed less certain, it’s interesting to note how large 95-year-old Queen Elizabeth II’s presence and reputation looms — and nearly impossible not to wonder what might happen when her reign ends.