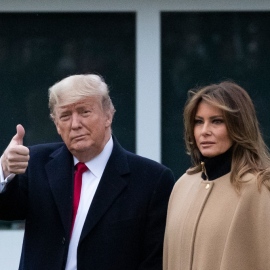 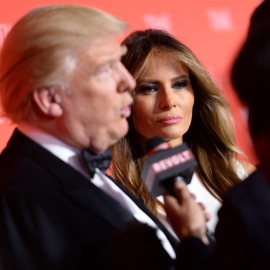 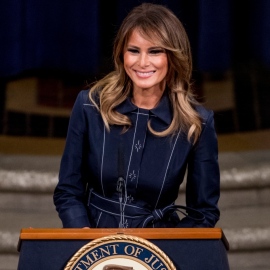 A happy belated birthday to Barron Trump, the now 15-year-old son of former President Donald Trump and former FLOTUS Melania Trump. There is precious little known about Barron, in part a testament to Melania’s insistence on keeping certain aspects of her life private. Or perhaps Barron’s privacy was preserved because Donald’s other adult children, Eric, Donald Jr., and Ivanka Trump were so happy to step into the foreground, while sister Tiffany Trump maintained a haphazard middle ground. At any rate, we have little context with which to greet Melania’s birthday wishes to her son, a photo of two large black balloons in the shape of a “1” and a “5,” austere and heavily filtered. Where Donald was a man of too many words on Twitter, Melania offers us precious few with which to make meaning of her messages. This much is clear: It is Barron William Trump’s 15th birthday, and his mother Melania would like him to have a happy one.

The photo, below, is the most personal piece of information Melania Trump has shared on social media since leaving the White House. With her message to Barron, “Happy birthday BWT ❤️❤️❤️,” she’s reminding us that she’s a mom celebrating her son — and, perhaps pointedly, of absolutely nothing else. Melania has never particularly felt the public deserved a peek in on her family life, and this photo doesn’t particularly give us one. It does, however, give fans the opportunity to add their own well wishes in the comments.

While Donald’s Twitter account has been suspended and Ivanka Trump is taking a self-imposed social media break, Melania is still on and active, though she doesn’t make the daily use of her accounts that her husband might have. She has tweeted fewer than ten times and posted to Instagram only five times in her post-FLOTUS days, largely reminiscing on the past four years. If this non-glimpse into her life with Barron is any indication, she’ll continue to keep a tight lid on her private affairs going forward. As for what we hear of Donald’s plans, we can’t say he promises the same.

Before you go, click here to see Melania’s quotes about Donald Trump, from their marriage to the presidential race.