Tom Brady has done it again, winning the seventh Super Bowl of his career with the 2021 Tampa Bay Buccaneers’ defeat of the Kansas City Chiefs. Brady is known for many things on the football field (mostly winning games), but our favorite post-game move is the inevitable celebration with his family: wife Gisele Bündchen and kids Vivian, Benjamin, and Jack. In his first year with the Bucs, Brady has brought the team to the very top, and Bündchen, his kids, and even parents Galynn Brady and Tom Brady Sr. were there to cheer him on. That means we were treated to our favorite Super Bowl post-show of all: Brady celebrating with his family on the field.

Brady’s kids were there yet again to steal the show, with daughter Vivian throwing handfuls of her beloved confetti in the air beside him. He also briefly handed the Vince Lombardi trophy to his 8-year-old daughter, who seemed quite pleased with her shiny treasure, as he fielded questions. Eleven-year-old Benjamin Brady, Tom’s other child with Bündchen, and 13-year-old Jack Moynahan, his eldest with ex Bridget Moynahan, weren’t quite as exuberant as their younger sister, but they definitely seemed proud to be up there with their seven-time champion and five-time MVP dad. 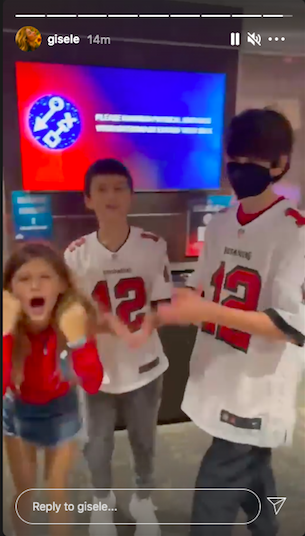 Bündchen also shared some behind-the-scenes photos of Brady’s kids flipping out at his win, and it’s clear these kiddos have a love of football in their blood already.

Tom had nothing but positive things to say out on the field after his win. “I’m so proud of all these guys out here,” he shared. “The team had a lot of confidence. We came together at the right time. I think we knew this was going to happen tonight, didn’t we?”

When Brady’s on your side, it’s starting to seem like you can count on a Super Bowl win — and whatever makes Vivian happy makes us happy, too.

Before you go, click here to see every Super Bowl halftime performer since 1993.