The worst thing about being famous is having to weather private family issues in a very public way. Megan Fox and Brian Austin Green are finding that trying to sort out a divorce isn’t easy when everyone is chiming in about marriage rumors with their new significant others. It’s the last thing they want to deal with while trying to figure out what is best for their three sons, Noah, 8, Bodhi, 6, and Journey, 4.

Green even referenced the ongoing marriage rumors in a recent Instagram Story post writing, “Shame on certain news outlets for not fact-checking and possibly making a hard situation even harder for kids. Let’s all prioritize responsibility this year.” We can hear the frustration in his tone even though it’s a social media post. Just because he’s moved on with Dancing with the Stars pro Sharna Burgess and Fox is comfortably settled with Machine Gun Kelly doesn’t mean they are both running down the aisle with their new mates. 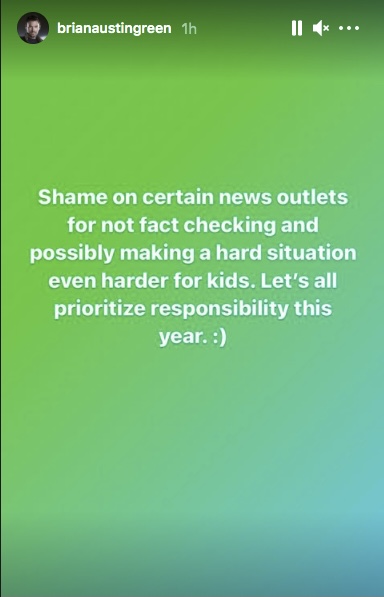 They have to unravel a decade-long marriage while making sure their three kids are happy and healthy throughout a difficult process. It certainly doesn’t help when sources are running to the media to share endless stories about the budding relationships.

“He would marry her in a heartbeat, but Megan isn’t in any rush to get married again right now,” an insider blabbed Us Weekly about MGK’s feelings for his girlfriend. “She is enjoying the pace that their relationship is going in and is content with how things are currently.”

Of course, she’s enjoying the pace of the new relationship. There is no rush to get married again because marriage is not the first thing on her mind at the moment. It’s easy to see why she and Green would get sick of the stories and people asking about the notable ring on her left hand — which turned out to be a paparazzi prank that read “f**k you.”

Honestly, can’t a woman wear a stunning piece of jewelry and enjoy her new serious boyfriend without rumors popping off about an engagement?