As a pro-Trump mob surrounded and broke into the Capitol yesterday, the Trump family was hard at work using their social media platforms to tamp down the violence and instill law and order — once they realized the extreme backlash for doing otherwise, that is. Eric Trump, after tweeting the day before “Patriots — Who’s coming to Washington D.C tomorrow!!!” reversed course to “we are the party of Law & Order;” Donald Trump Jr., hours after vowing to “send a message” at his father’s rally, later tweeted “this is wrong;” and Ivanka Trump, who in a now-deleted tweet called the rioters “American patriots,” later said that “violence is unacceptable.” But there’s one Trump-adjacent family member who definitely isn’t ready to let them off the hook: Karlie Kloss, sister-in-law to Ivanka as the wife of Josh Kushner, Jared Kushner’s brother. After Ivanka’s “patriots” tweet went out yesterday, Kloss snapped, and spoke more freely about the Trumps than she has in some time.

No. Peaceful protest is patriotic. Violence is unacceptable and must be condemned in the strongest terms. https://t.co/GwngZTqzTH

As the riots unfolded yesterday, former Victoria’s Secret model Kloss tweeted this: “Accepting the results of a legitimate democratic election is patriotic. Refusing to do so and inciting violence is anti-American.”

Accepting the results of a legitimate democratic election is patriotic. Refusing to do so and inciting violence is anti-American.

In a now-deleted comment (yesterday’s internet was chaotic), Overdress Jen wrote: “Tell your sister in law and brother [in] law.” 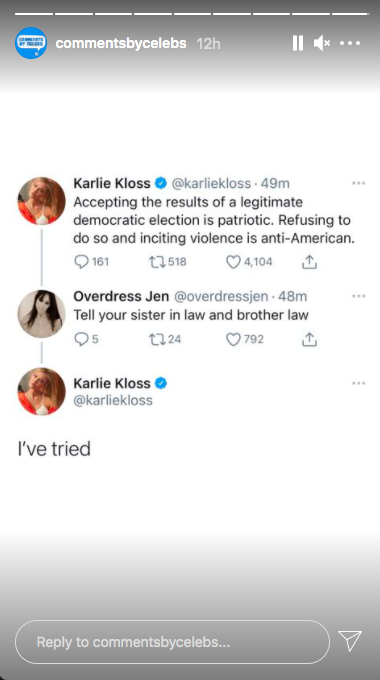 Kloss and her husband Josh are outspoken liberals, having supported the Biden/Harris ticket in 2020. While her marriage to Josh reportedly created some tension in the Kushner family, who wished their son had chosen someone more suitable to the family’s values like Ivanka, they have maintained cordial, if frosty relations over the years, with Kloss and Josh even buying up a house in Miami next door to Jared and Ivanka’s new spot. And as recently as last night, Jared and Josh’s father Charles Kushner told a friend, per the New York Times, that Trump’s behavior was “beyond our control,” perhaps signaling a desire to distance the family in coming weeks.

It may be that the events of yesterday finally proved too volatile for Kloss and her husband to ignore — or, it could be that Kloss is issuing Ivanka an apology as we speak. Ivanka Trump’s representative has not replied to our request for comment at this time.