David Beckham has never been one to shy away from posting photos of his kids on social media. The soccer player and his wife Victoria Beckham’s sons 21-year-old Brooklyn, 18-year-old Romeo James, 15-year-old Cruz, and daughter 9-year-old Harper Seven have graced his Instagram many a time — but are rarely seen in one photo. On Christmas Eve, though, the father and mother of four took to their ‘grams to share a snapshot of their entire family smiling for the camera in matching silk pajamas. Leave it to the Beckhams to sport chic navy button-downs instead of ugly Christmas sweaters or Blues Clues-like PJs! (see the Willis family)!

“Special moments together as a family ❤️❤️❤️❤️❤️ Merry Christmas to everyone ❤️,” papa Beckham captioned the charming photo. While he dons a Santa hat, his sons Cruz and Romeo (who practically look like his twins) wear The North Face beanies. (FYI, you can order a newer style of their unisex hats, here .) Still, as much as we love this photo, we couldn’t help but notice one important person missing from the family shot: Brooklyn’s fiancé Nicola Peltz. Wherever she may be, the 25-year-old model commented on her future mother-in-law’s post with a cheerful message. “I love you all so much ❤️ merry christmas!”

Before the fashion designer shared a photo of her blood family, she posted a photo of her Spice Girls family from the ’90s. Decked in Santa outfits, Posh Spice and her former bandmates are pictured smiling for the camera in what appears to be a Bravo ad. “Whatever it looks like this year, here’s hoping you manage to have a spicy Christmas all the same ❤️✌🏼🌶  kisses,” she captioned her photo. Happy spicy Christmas everyone!

Before you go, read more about David and Victoria Beckham’s family life. 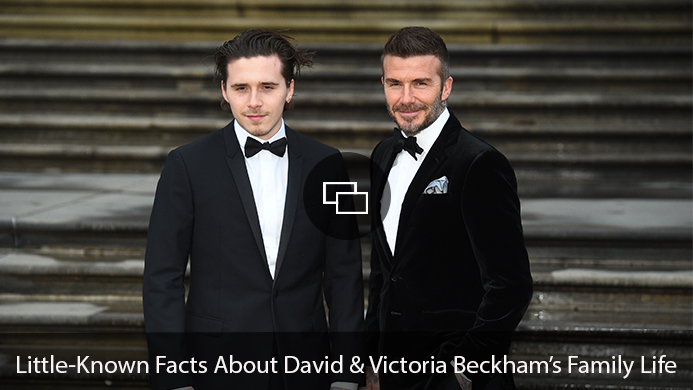