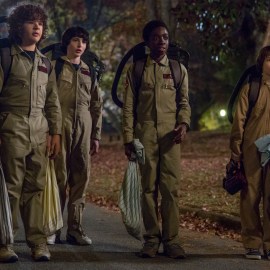 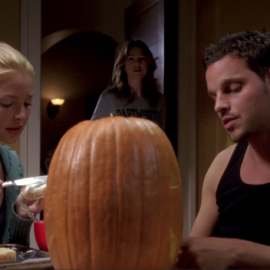 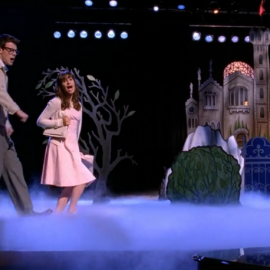 The Best Halloween TV Episodes to Watch on Netflix 10 Images

Halloween this year looks very different than in the past. Trick-or-treating is discouraged by the CDC and many have opted to spend All Hallows Eve indoors this year instead. Still, our fave celebs didn’t miss out on the chance to wow us with their costumes, even if they were just staying in. From Kim Kardashian to Halsey, these stars pulled out all the stops this year and brought out their most creative and over-the-top costumes to celebrate. Here are the best celebrity costumes from (arguably) the spookiest Halloween of all time.

Majestic, beautiful — Chrissy Teigen looks absolutely stunning this year. Her Black Swan inspired look has us questioning just what can’t she do?! And that fluffy tutu is giving us all the Swan Lake vibes from our dreams. Even though the famous chef said she had a hard time seeing where she was walking, she wore her fit with elegance. Plus, we’ll go ahead and give John Legend some brownie points for his Spider-man costume too, even if Teigen may not agree. “Why is your — John your dick keeps bouncing against the thin fabric!” a giggling Teigen said.

OK, we need Barrymore to be in the remake for Wizard of Oz immediately. I mean seriously, why hasn’t she been cast already?! The actress looks identical to Glinda the Good Witch and absolutely killed this look. Decorating the set of The Drew Barrymore Show, she personalized her very own ‘Oz’ with her initials. It’s the wand for us too, Drew. We are so here for this!

Mav and I are channeling major heroes this Halloween. ❤️ #ad Thank you to all of our essential workers for all that you do always, and especially this year! Since we are all at home and have been ordering a lot online, we wanted to encourage people to get creative around the house (while also upcycling boxes that have been sitting around). Halloween looks a bit different this year, so we repurposed some Amazon Prime boxes and household items to celebrate from home in our #Boxtumes. We would love to see how you’re getting creative with upcycled Halloween costumes! @amazon #MoreThanABox

A post shared by Katherine Schwarzenegger (@katherineschwarzenegger) on Oct 27, 2020 at 8:39am PDT

We love a good socially conscious costume. This year, Schwarzenegger gave a tribute to the essential workers who have worked at the front lines tirelessly during the pandemic. In her post she wrote, “Thank you to all of our essential workers for all that you do always, and especially this year.” In an effort to reduce her carbon footprint, she up-cycled boxes that she had leftover from her many Amazon online orders. And, she even had enough to make her adorable doggo, Maverick, his own firetruck! With his little tail peeping out of his truck, we this Maverick won Halloween.

It takes my breath away! Well it would if I had any…

Tim Burton would be so proud. One of Halsey’s favorite holidays is Halloween, so we’re not surprised she went all out. With the extra time on her hands, she transformed herself into a stunning Emily from Corpse Bride. The hair! The eyes! How her blue contour looks better than our daily look? — We’re not sure. No doubt she looks amazing, though we can’t help but wonder what that makeup removing process was like…

Kim Kardashian dressed up as the star that was on basically everyone’s screen earlier this year: Carole Baskin. Of course, the proud mama included her kiddos into her costumes as her tigers. She was joined by her annual Halloween partner, Jonathan Cheban a.k.a. Foodgod. North West and Saint look like they’re having a blast channeling their inner tiger and it is too cute! And baby Psalm looks absolutely adorable wrapped in Kim’s arms.

CARDI. Swipe to the right for a Surprise. 😎 #Halloween

Ciara came through drippin’ as Cardi would say. This year, Ciara had not one but two iconic looks. The singer dressed up as some of the hottest rap girls in the industry: Cardi B and Megan Thee Stallion. She mimicked both the artists’ past album covers and did so flawlessly. Honestly, her two looks had us do a double-take, it’s that good.Plus, her baby boy Future makes an appearance as Offset at it is giving us life!

Happy Halloween. Hanging out in Yellow Springs and Dayton OH this past Summer inspired me at #ChappelleCamp I Love the music of the Ohio Players. I also would Love to be #Nubia from #wonderwomancomics Also this is my Chance to show off my hard work so far. I will have the Body of #FloJo by this time next year. Thank you #luxurylaw #sirjohn #hair4kicks #msayles #SHEREADY

Tiffany Haddish showed off what she’s been up to during lockdown. To this look, we have one thing to say: ABS! The Girls Trip actress looked amazing recreating the Ohio Players’ Pain album cover. “Hanging out in Yellow Springs and Dayton OH this past Summer inspired me at #ChappelleCamp I Love the music of the Ohio Players, wrote Haddish. She looks flawless, and she knows it.