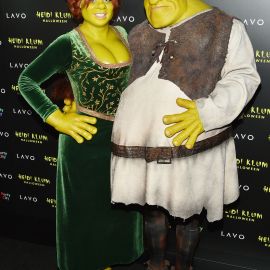 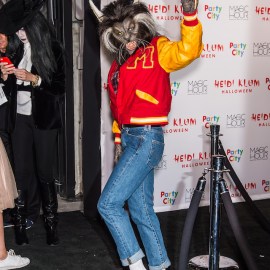 Halloween might look a bit different this year, thanks to the COVID-19 restrictions in some areas, but Heidi Klum is still marching on with her annual epic transformation. On Friday, the supermodel posted the dramatic videos of her costume build — and there’s more than one look!

First you see me, now you don’t! 👻👻👻 The transformation begins… #HeidiHalloween2020

The first video shows a masked Klum lying on a white and gray tie-dye bed in a similar colored bra and panties. Three makeup artists are in full-face shields and masks work on her with attentive detail and essentially blend her body into the bedding.

The second video shows Klum lying on her back in a nude bra and brown panties with the camera overhead capturing every moment. They paint her legs and arms a marbleized brown, while her upper body transforms into a beige block of color.

The best part of the video is watching a very patient Klum biding her lengthy preparation time by scrolling on her phone. Hey, a girl has to entertain herself somehow!

The videos are just a tease of what her costumes will look like because they end before we get to see the finished project. Yet Klum does drop a few clues for us on her Instagram feed.

Halloween is extra special this year because I am getting help from my kids! 😱🧟‍♀️🧟‍♂️🧟‍♀️🧟‍♂️😱 #HeidiHalloween2020

“Halloween is extra special this year because I am getting help from my kids!” she described the photo of her kids dressed like mummies. What could her costume be? Klum wouldn’t even let us guess as she turned off the comments on her Instagram feed.

Even though her annual Halloween party is a bust due to the pandemic, her social media pages are sure to reveal all of the spooky details. We’re dying to know!

Before you go, click here to see all of Heidi Klum’s most insane Halloween costumes over the years.