This September, Ant and Christina Anstead shocked their fans with the announcement that they were going their separate ways, just a year after the birth of their baby boy Hudson. After two years of marriage, they had decided to divorce for the good of the family — though Ant has heavily hinted since that the decision to separate was primarily Christina’s and not his. Other than sharing snaps of young Hudson, Ant has been relatively quiet on social media and now we know why — the reality star has been in hiding completing a 30-day breakup recovery program to get over his divorce. The results are in, and Ant is recommending the intensive program to anyone with lingering heartbreak. Leery of a (no doubt expensive) program involving worksheets and daily emails and promising to cure your relationship grief? We are too. But Ant’s making one thing clear: he’s more than ready to move on now that he and Christina are really through.

The program that Ant completed is called Create the Love and it’s run by human connection specialist Mark Groves, who recommends the 30-day treatment for anyone who has “tried to ‘get over it’ but just can’t,” whose “heart is in a million pieces,” or who wants “to understand what happened and clean up the mess of [their] past.” 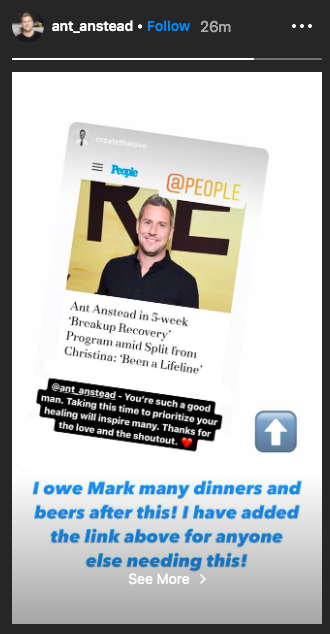 Sharing his progress on Instagram, Ant couldn’t speak highly enough of how he’s been spending his time since Christina announced their split last month.

“I am now on day 30 of this and I have to say it’s been a lifeline for me!” he wrote, per People. “If anyone out there needs this DO IT!” he continued, sharing a swipe up link to the website.”

The program costs a cool $197, but with daily videos, emails, and exercises, it seems like Ant would swear it’s the real deal. So, does this mean he’s totally closed off to the possibility of reconciliation with Christina? This program promises to help you completely move on and find your best self…and it seems telling that Ant’s advertising how well he’s mastered that.

We’ll stop short of endorsing any program that promises to get you over a divorce in 30 days. But we’re definitely happy to hear that Ant is feeling better than he was a month ago.